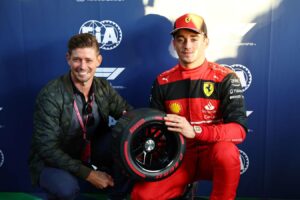 Charles Leclerc said it was “impossible” to see where he was going at times during Australian Grand Prix qualifying with the setting sun causing significant issues.

The Ferrari driver said he did not know whether or not he was on the grass during the session and called over the team radio for his garage to find a helmet with the darkest possible visor on it to try and aid his vision.

The Melbourne sun was beginning to go down towards the end of the session as qualifying had been delayed after red flag periods caused by Lance Stroll and Nicholas Latifi’s collision in Q1, plus Fernando Alonso’s crash in Q3 after losing his power steering.

With that, the going was tough for the drivers as they tried to navigate Albert Park in qualifying trim – with Sunday’s pole-sitter particularly animated on the topic.

“The sun, I’ve never struggled as much as I did today with the sun. Honestly, it was impossible to see anything.

“I had no idea whether I was on the grass or not. In Q2 especially I said ‘okay, I had only been on a lap, now let’s just calm down and go in Q3’.

“Then on the second run of Q3 I managed to put that very good lap together.”

Leclerc’s pole lap saw him become the only driver to break the 1:18 barrier all weekend, putting him almost three tenths clear of Max Verstappen on the front row.

He added that now he is in contention at the front race by race, it is easier for him to showcase his talent – as well as mistakes being highlighted more closely – but said he is “at ease” when fighting for poles and wins.

“The last lap was special, I gave my 200% percent,” Leclerc added to Sky Italia. “In Jeddah I did not achieve anything, here I’m on pole. We have a lot of bouncing, we have to improve that, I will eat little.

“I did not have a great step from 2021. Last year it was just more difficult to get noticed and you could spot much more the mistakes. I’m more at ease fighting for the pole.”