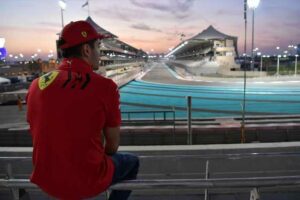 Ferrari have said that Charles Leclerc is “currently feeling fine” after returning a positive COVID test upon his return from Abu Dhabi.

The final race of the 2021 season took place in Abu Dhabi, with Max Verstappen emerging as the winner and new World Champion, with the race weekend followed by two days of testing.

For 2021 the traditional Young Drivers’ Test was combined with track time on the 2022 18-inch Pirelli tyres, using mule cars.

Ferrari though have confirmed that Leclerc tested positive for COVID when returning home to Monaco, and now must self-isolate at home.

Fortunately, Ferrari say that he has only “mild symptoms”.

Scuderia Ferrari Mission Winnow driver @Charles_Leclerc has tested positive for COVID-19.
In accordance with protocols required by FIA and the team, Charles was tested on his return from Abu Dhabi.
He is currently feeling fine, with mild symptoms and will self-isolate at home.

“In accordance with protocols required by FIA and the team, Charles was tested on his return from Abu Dhabi.

“He is currently feeling fine, with mild symptoms and will self-isolate at home.”

This is the second time that Leclerc has tested positive for the illness, having contracted it at the start of 2021 back in January.

At that time, Leclerc also described his symptoms as “mild”, going on to make a full recovery.

On the track it was a strong season for Leclerc, who twice claimed pole position in the Ferrari SF21, those arriving back-to-back at his home race in Monaco and then the Azerbaijan Grand Prix which followed.

He would pick up one podium across the 2021 season, that being P2 at the British Grand Prix, ultimately finishing P7 in the Drivers’ Championship, 5.5 points behind team-mate Carlos Sainz.