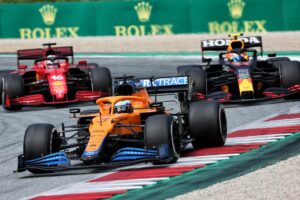 Daniel Ricciardo’s trademark smile was back after an Austrian Grand Prix he had “enjoyed” – not least because he had “annoyed some people”.

The Australian’s morale has taken a big hit this season due to a difficult first eight races with McLaren, but it was the familiar chirpy Ricciardo holding court in his post-race interviews this time.

A week ago at the Red Bull Ring, a brief loss of power meant the 32-year-old, who celebrated his birthday on Thursday, ended up 14th when a points finish had looked on the cards due to some early overtaking moves.

He suffered another disappointing qualifying session, starting P13, but this time made his progress up the order and took the chequered flag seventh after being overtaken by Carlos Sainz’s Ferrari on the final lap.

It was a much more positive outcome and while he refused to say whose skin he had got under – and it was not immediately obvious from the race coverage – Ricciardo appeared to take pleasure from having wound up at least one of his rivals.

Asked if he was pleased with his points finish, Ricciardo told reporters: “I’m not going to say I’m not. I’m trying not to be too high, I think, because obviously yesterday was not great.

“I don’t want to be too extreme and be the guy that when everything goes well you’re super-cool and nice and when it doesn’t, you hate everybody. I’m trying to stay a little more level.

“I enjoyed the race, I think that was important. I had fun and it sounds so basic but sometimes it’s the most important – you just want to be enjoying it out there and obviously when you don’t have good days or successful days it is hard to enjoy it.

“So just having a day like today and having some battles and just keeping a race with a lot of pressure, I think that kept me occupied and meant I enjoyed it more.”

Ricciardo chose to remain cryptic about what had transpired during a grand prix which featured lots of close racing, various trips into the gravel and a host of driver penalties issued by the stewards.

“I had some good battles and apparently annoyed some people! That actually makes me very happy,” he said, before giving an evasive reply when asked who it had been.

“Apparently some people but that’s okay, that’s racing. I may have watched motocross this morning, that’s all.”