Daniel Ricciardo fears 'pretty much no visibility' despite P4 start 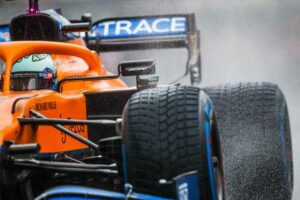 Saturday’s qualifying at the Spa-Francorchamps circuit took place in the wet with Ricciardo’s team-mate Lando Norris suffering a bruised elbow in a high-speed crash at the start of Q3.

The led to qualifying being red flagged for 43 minutes as, first the marshals cleared away the wrecked McLaren, and then Race Control waited for better track conditions.

Ricciardo went on to clock a 2:00.864 to finish fourth fastest, the Aussie joining Lewis Hamilton on the second row of the grid.

He, however, acknowledges that the race could be a lot more difficult than qualifying if the forecast rain comes down.

“The only thing with racing in the wet is visibility,” he said. “So qualifying you can create space to a point where the spray is not too bad, but in a race you’re there.

“And even in P4 you’re going to have pretty much no visibility.

“So I mean that’s the only thing that makes racing in the wet less fun, because you literally don’t see.

“But for competitiveness-wise I don’t know.

“I think we’ve got a decent car in the dry, so if the sun’s shining I’m certainly not against that. We’ll see.

“Whatever I think or hope for, it ain’t going to change what will actually happen!”

But whatever happens during Sunday’s 44-lap grand prix, the Aussie is still starting from the second row of the grid, a “good step” in the right direction as it marks his best qualifying showing as a McLaren driver.

“I think it kind of showed that it took a few laps to get that confidence and these conditions certainly reward some feel and some finesse but ultimately confidence as well,” he said to the official F1 website.

“So I don’t want to say that it’s perfect yet, of course, but I’m really happy with the progress and obviously I just expect Q1 to be closer and then I can be in the mix early on.

“But yeah, second row, I’m going to take it of course. With these crazy weather conditions and everything I’ll take it with a smile.”