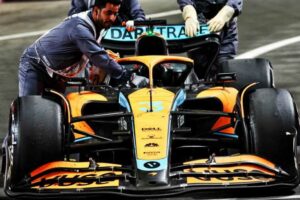 Daniel Ricciardo believed that McLaren had a strong chance of getting both cars in the points at the Saudi Arabian GP before his DNF.

McLaren, hampered by an issue with their front brakes, underwhelmed at the season-opening Bahrain Grand Prix, though the second round in Saudi Arabia was a more positive outing.

Granted, it was certainly not a smooth weekend for Ricciardo, who took a three-place grid penalty into the race for obstructing Esteban Ocon during qualifying, but fortunately the MCL36 looked to be a more competitive package this time around.

Lando Norris demonstrated that by finishing P7 and Ricciardo saw the chance to join his team-mate in the points, that was until his McLaren shut down on him, coming to a complete stop at the pit entry.

Now Ricciardo is struggling. The Aussie pulls up yards before the pit lane entry. 📻 "I've got no drive"

“I lost drive so there could be a number of things, maybe drive shaft if I was to guess but I am no mechanic so don’t take my word for it,” Ricciardo told reporters.

“Think we could’ve had double points which would have been pretty awesome from where we were a week ago.

“I think there are some positives to take from the weekend for sure, we still have a lot to go but certainly some progress which is nice.

“I think the racing is fun; you can follow this year and I think everything that we hoped would come out of these new cars so far is true, so I am very happy with that and like watching the battle for the lead.

“Course I want to be there but to know we can fight hard like that this year is really exciting so hopefully we will be battling for some bigger positions soon.”

The teams only had a few days between the Bahrain round ending and the Saudi Arabian Grand Prix starting to work on their cars, so Ricciardo felt that McLaren’s swift improvement was likely influenced by the Jeddah track suiting the MCL36 more.

Next up is a return to Ricciardo’s native Australia, with the race taking place around a reprofiled, faster Albert Park.

So, Ricciardo hopes that this will be another track which the McLaren enjoys.

“I think the characteristics of this circuit certainly seem to help us, I think both of us although we were not setting the time sheets alight we had a bit more confidence with the car from FP1,” said Ricciardo of the Jeddah track.

“So it still might ebb and flow depending on some circuits we go to, but looking at Melbourne and the changes they have made I think it is going to be quite flowing, hopefully that suits us. I think for the racing it will be good fun, so we will see what happens.

“I am excited to go home and compete there, for now we will keep chipping away and we can’t promise amazing results yet but we have got to keep at it and I am sure some better things are on the horizon.”