Daniel Ricciardo 'waved them on through' after power issue | Planet F1 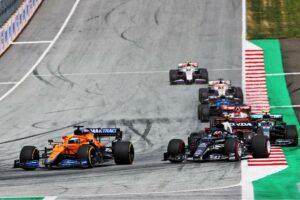 Daniel Ricciardo admitted it had been “heartbreaking” to lose out in his own snakes and ladders-type game during the Styrian Grand Prix.

The Australian had suffered a disappointing qualifying session for McLaren, starting 13th, but quickly moved up the order and was running eighth early in the race at the Red Bull Ring.

However, all his good work was undone when his car sustained a temporary loss of power and having climbed the ladder, he slid all the way back down the snake to his original position.

It got even worse for the 31-year-old in the end as he wound up 14th, nine places behind his team-mate Lando Norris, who was again the highest finisher outside of the Red Bull and Mercedes drivers.

The 🏁 flies to bring an end to the #StyrianGP 🇦🇹.

A very good drive by Lando to secure 10 points with a P5 finish, but Daniel misses out in P13. pic.twitter.com/iQx3SV1yoB

“It was such an unlucky race really,” lamented Ricciardo to Sky F1. “We went from 13th to eighth, an awesome start, an awesome first lap, we put ourselves in such a strong position ahead of a lot of our ‘quicker’ rivals and on the medium tyres, so we were sitting pretty.

“Then all of a sudden I lost power, so every position and more that I gained I basically just waved them on through. We were able to fix it on track, it was a control issue so we were able to get it, but then it was too late and I’m back in the mess that I did well to get out of on the first lap. Then you’re in traffic and in a train and honestly the race is over after that.

“We simply just had that issue and it was painful to see all the work undone when you’re trying to fix it and everyone’s just going past you.”

Ricciardo was only able to guess at what had caused the problem.

“I don’t know exactly what it is yet,” he added. “I know a lot of cars were looking for clear air to get some cooling, so it could have been temperature-related. If I was to have a wild guess right now I’d say that, but honestly not sure.

“It’s obviously heartbreaking for me and disheartening but I’m not the only one who feels this pain.

“The weekend obviously went from bad to worse and I look forward to getting out of here and coming back next week with a fresh approach.”