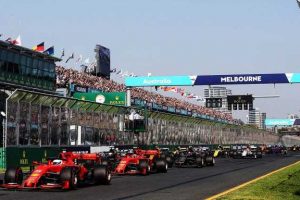 Daniel Ricciardo says that, if the Brazilian Grand Prix is cancelled, he’d love to see an Australian double-header be added to the calendar.

The race in Brazil currently has a slot on the 2021 calendar, but with the country currently being one of the hardest hit in the world by COVID-19, doubts are rising about whether it will go ahead or not.

The sport is keen to stick to the original number of 23 rounds this season, so if the race in Interlagos was cancelled, a replacement would most likely be brought in.

Imola and Portimao have already stepped in to replace the Grands Prix in China and Vietnam, and Istanbul Park and the Nurburgring have also stated they’d be willing to do so too.

However, Ricciardo, who feels that racing in Brazil is unlikely, would like to see an extra race held at Albert Park in Melbourne instead.

“Logistically alone you’re swapping one end of a globe to the other [to race in Brazil] so that’s a challenge in itself,” the McLaren man told EFTM.

“I am aware Brazil currently is not in a good place with COVID. Currently, if we were scheduled to go there this weekend then I’m pretty convinced we’d be up in the air, I don’t think we’d be, let’s say, all in.

“I know they’re obviously keen on 23 this year, and a bit like last year, I’m sure there are maybe some circuits that could fill some gaps if some are lost so we’ll see.

“I think it’s for now, on the hope that by then things settle down, but if it’s still as it is then that race could potentially be obviously in question.

“I would love, especially if there is any form of quarantine when we get there, to do a double-header (in Australia) to make the time [there] worthwhile.”

The #AusGP circuit works are in full swing at Albert Park. #F1 pic.twitter.com/oVJEEFt5mw

Traditionally in modern times, the Australia Grand Prix is the season opener, but that wasn’t the case in 2021 as it was postponed to later in the year as a result of the pandemic with Bahrain replacing it.

Currently, it is set to go ahead in November instead, and ahead of it, the track is undergoing something of a makeover.

Changes to the track layout are being made with overtaking and speed the main goal, and the Australian Grand Prix Corporation predict that drivers should now be able to complete the circuit in qualifying in a time of 1m15.8s.