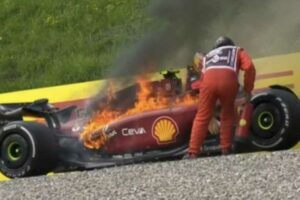 Carlos Sainz retired from the Austrian Grand Prix with an engine failure, which quickly turned into a fire on his Ferrari.

The Spaniard was running in third and was chasing down Max Verstappen on lap 57 of the race, but lost power on the straight heading down towards Turn 4.

He was crestfallen on team radio and, before the marshals could stop the car completely, Sainz had to make a quick escape from his car as it burst into flames – but he did so quickly and safely.’

Marshals were quick to get on the scene and extinguish the flames on the F1-75, with a slow-motion replay showing a ‘bang’ in the middle of his power unit that saw the sidepods move outwards as something combusted in the car.