F1 Fines Sebastian Vettel $5,432 for Riding a Scooter on Track 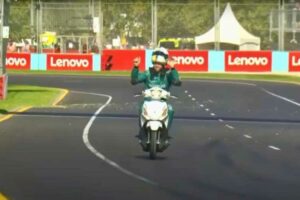 The 2022 Formula 1 season isn’t really going Sebastian Vettel’s way. First, he tested positive for coronavirus and missed the first two races of the year, and now that he’s returned to Australia, he’s been fined 5,000 euros for riding a scooter back to the pits after his Aston Martin broke down on track during Friday Practice 1.

When Vettel’s car failed towards the end of the session around Albert Park, he pulled it over to the side of the track and waited with marshals until the session had ended. Once the chequered flag was out, he asked a marshal if he could borrow one of the trackside scooters that you quite often see drivers take back to their garage, after some sort of car mishap.

Problem is, Vettel didn’t take the steward with him and he drove on the actual circuit, not the access roads around the side of it, to get back to Aston Martin. Needless to say, an unauthorized vehicle on the track during a race weekend isn’t allowed (although the session had ended there could have been other vehicles due to go out), so the stewards have lumped Vettel with a fine.

“Vettel got on the scooter, expecting the marshal to get on behind him. When he didn’t get on, Vettel departed alone for the pit, without the prior approval to do so. Meanwhile, the marshal was trying to contact Race Control for instructions.

“In driving on the track to his pit, instead of the designated route, Vettel breached Article 26.7 of the Formula 1 Sporting Regulations, which prohibits anyone from being on the track in the five-minute period after the end of a session, with the exception of specifically identified personnel, which makes no provision for drivers to have such access unless specifically authorized.”

The snappy Article 26.7 states that “During the period commencing fifteen (15) minutes prior to and ending five (5) minutes after every practice session and the period between the commencement of the formation lap which immediately precedes the sprint session and the race and the time when the last car enters the parc fermé, no one is allowed on the track, the pit entry or the pit exit,” unless they’re marshals or have been given permission by race control.

The equivalent to $5,432 is probably pretty small change for a four-time world champion but still, a rough start to the weekend.