Home » Racing » F1 » Why do Verstappen’s offensive comments get a free pass? Following his FP2 clash with Lance Stroll at the Portuguese Grand Prix, Max Verstappen’s choice of language over the radio was insulting and offensive to numerous groups of people. And yet, it has conspicuously gone unpunished…

Words carry more than their dictionary-defined meanings; they carry the weight of years of history, context and symbolism in their usage. We use words to communicate, describe and – sometimes – to offend, and the words we consider offensive aren’t just for the sake of having a term to offend. Instead, they’ve evolved from a historical and often unsavoury starting point.

During the second free practice session ahead of Formula 1’s Portuguese Grand Prix, a few choice words were uttered in the aftermath of a clash between Max Verstappen and Lance Stroll.

Verstappen, looking to pass Stroll and assuming that the Canadian driver was due to embark on a slow lap, dived down the inside. Stroll, meanwhile, assumed the normal racing line as he was set to do a second lap at full pelt. The two coalesced in the middle of the corner; Stroll left stranded in the gravel and Verstappen airing his displeasure on the radio.

Parents would have covered their childrens’ ears in Verstappen’s opening gambit, but it’s nothing that the majority of the population won’t have heard before. However, the next part is far more heinous, and not befitting of a sporting – or indeed, any – environment.

“What a retard,” Verstappen continued. “I have damage. What a mongol. I swear.” 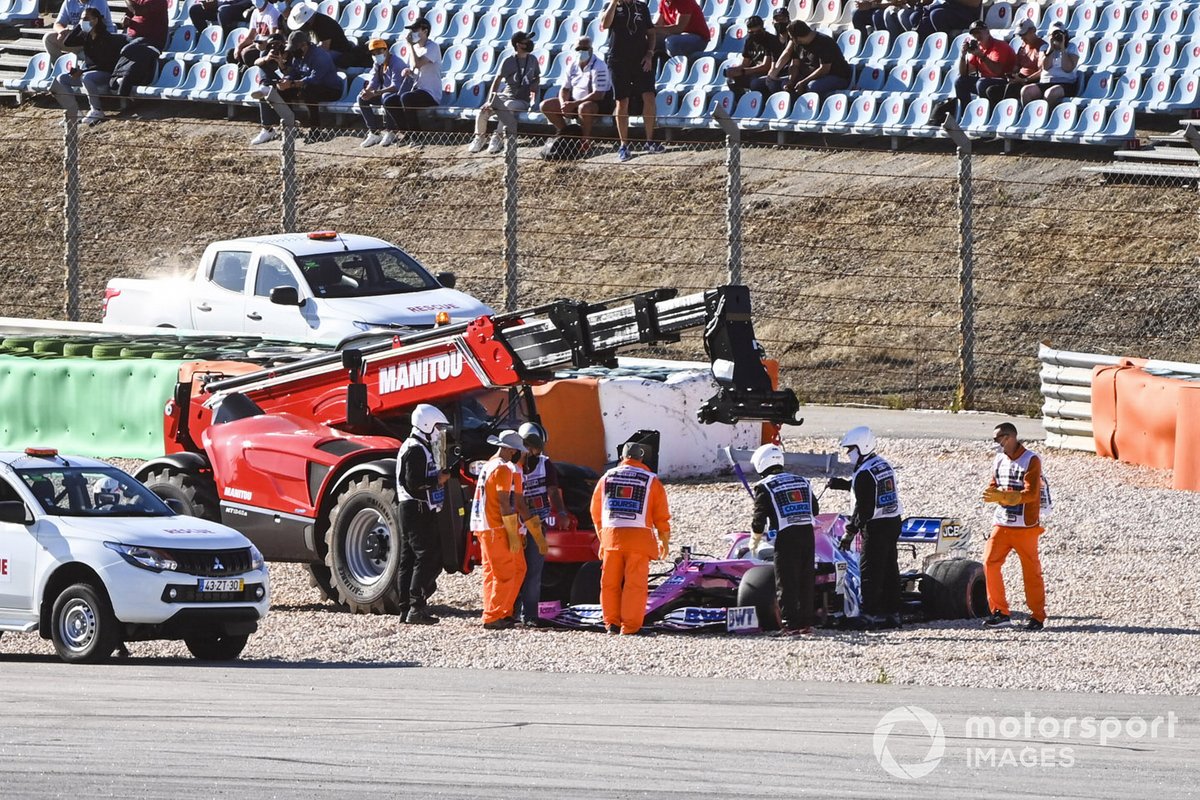 There’s no way to sugarcoat it – this is ableist language from Verstappen, aired publicly for all to hear. “Retard”, of course, is a well-known slur against people with disabilities. His use of the word “mongol” also has racial connotations, and this is not the first time he’s done so either; in 2017, Verstappen took to Dutch TV to call FIA steward Garry Connolly a “mongol” following his track limits penalty at the United States Grand Prix.

On that occasion Verstappen was more remorseful, and said “he didn’t mean to hurt anyone”, which distinctly contrasts with his attitude this time around. When asked about the offensive nature of the language he’d used post-clash with Stroll, Verstappen replied that it was “not my problem”.

Let’s review: Verstappen has been able to publicly use ableist, borderline racist language without any fear of sanctions from those in charge. There’s been no apology from Verstappen, and the matter has been rather brushed under the carpet without any further inquiry from those involved.

To anticipate some of the social media reaction, people will attempt to make the case that neither “retard” or “mongol” are offensive. The defense usually runs along the lines of “I use these words all the time and people aren’t offended, so why should it matter?” There’ll be an argument about that individual lacking empathy and, as all social media arguments go, it’ll be unproductive and go nowhere. Categorically, these are offensive terms.

Uuganaa Ramsay, the director of Mongol Identity, has released a letter explaining her disappointment at Verstappen’s language over the radio. Ramsay, born in Mongolia before emigrating to Scotland, wrote the book Mongol – and in it, details her life growing up in Mongolia and the tragically short life of her son Billy, who was born with Down’s syndrome before dying at just three months old.

“We want to express our disgust and deep concern at the use of the term “Mongol” as hate speech,” Ramsay wrote.”Mongol”, which has been spuriously and offensively used to describe people born with Down’s syndrome, is a word that Ramsay is fighting to ‘reclaim’ in her book and with Mongol Identity, her foundation with which she hopes she can educate people about issues that Mongolians and ethnic Mongols face. In her letter, Ramsay explains the etymology of using “mongol” as a disparaging term. 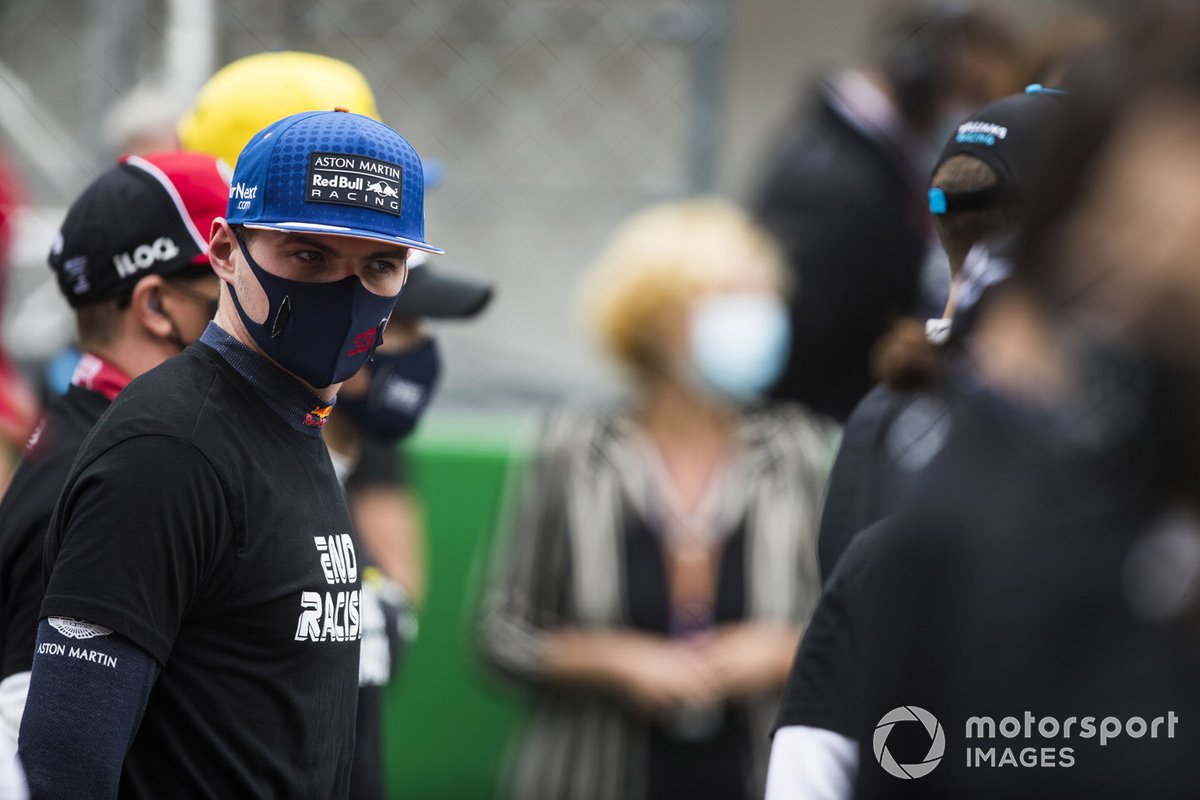 “The term ‘mongoloid’, referring to people with Down syndrome, was dropped by the World Health Organisation in 1965 because it was and still is considered to be offensive to those with Mongol ethnicity.”

“Dr John Langdon Down, who discovered Down syndrome in the 1860s, used “mongolism” and “mongoloid” to describe the syndrome as he stated there were similar physical characteristics with people from Mongolia and Mongoloid race (those of Asian ethnicity).”

Those perceptions from Down were based largely on the then-popular pseudoscience of phrenology, in which the skull’s dimensions were deemed to be a measure of an individual’s mental capacity. Eventually Down disavowed that idea, his faith in phrenology having lapsed, but the theory remained in place for a century.

In truth, Down’s syndrome is caused by a genetic anomaly where someone is born with an extra 21st chromosome. In the 1950s, when an extra chromosome copy was found to be the underlying factor in Down’s syndrome, there were immediate calls to repeal the oft-used term “mongolism” due to its racist nature.

“People think that it stopped when they removed it in the sixties,” Ramsay tells Autosport. “But it’s still used today. I’ve had people tell me that they’ve been asked not to call themselves Mongolian or Mongol, because people still see ‘mongol’ to describe stupid.” She then described a number of distressing situations in which ethnic Mongols continue to be discriminated against, underlining the fact that although the WHO repealed the use of ‘mongol’ and ‘mongoloid’ over 50 years ago, it is still used as disparagingly around the world.

Even if one was unaware of the history behind the offensive nomenclature, anyone with a rudimental knowledge of geography could probably consider it a derogatory term. Verstappen, who races F1 cars around the world, will likely have seen a map – even if it was restricted to the in-flight entertainment screen of an aeroplane.

In Sky F1’s commentary during the third free practice session, lead commentator David Croft rightly condemned the language Verstappen used. Co-commentator Paul di Resta also suggested that there were times other drivers had used similar language over the radio and, although it was qualified as a “heat of the moment” throwaway term, one would surely revert to frequently used profanity in moments of high stress. And, as mentioned, “mongol” is a term previously used by Verstappen – so these are surely not isolated incidents. 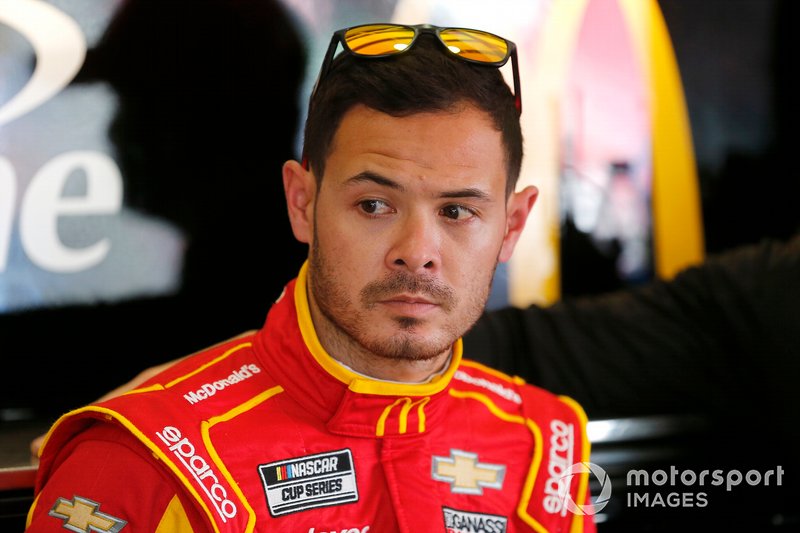 As Ramsay also alludes to in her letter, it’s surprising that F1 and the FIA have not at least taken some degree of action against Verstappen. In other sports, any degree of hate speech is punished.

During a Premier League match between Manchester United and Liverpool in 2011, then-Liverpool frontman Luis Suarez racially abused United left-back Patrice Evra. For this, Suarez was handed an eight-game ban and a £40,000 fine. The fine, of course, is chickenfeed to a footballer, but the ban levied upon Suarez will have provided some degree of a deterrent. Earlier this year, Leeds United goalkeeper Kiko Casilla was also found to have been guilty of using a racist term against Charlton’s Jonathan Leko – also receiving an eight-game ban and a fine of £60,000.

In another example, US soccer team San Diego Loyal walked off the pitch during a game against Phoenix Rising, after Junior Flemmings used a homophobic term against Collin Martin, an openly gay footballer. Flemmings received a six-game ban and a fine, and elsewhere Australian rugby player Israel Folau was sacked by Rugby Australia for posting homophobic tweets on his personal Twitter account.

There’s also a recent precedent in motorsport too, where NASCAR Cup driver Kyle Larson used a racial slur while taking part in an iRacing event, broadcast on a number of drivers’ streams of the race. His former team Chip Ganassi Racing suspended him indefinitely, without pay, while NASCAR also followed suit – before Ganassi eventually fired him for his comments.

Whether or not you consider those punishments sufficient or not, there is another pertinent question: why does Verstappen get a free pass? If racist and homophobic language are punishable by suspensions, should the same not extend to ableist and racist language in F1 too?

On that occasion, the FIA punished him with “community service”, which amounted to the Dutchman having to spend a day in the stewards’ office at Formula E’s Marrakech E-Prix.Red Bull will probably not punish Verstappen for his part; the team will let his actions slide as it will not want to lose its star driver. The team did not condemn his ‘physical spat’ with Esteban Ocon at the 2018 Brazilian Grand Prix either, and Verstappen seemed content enough to double down on his actions – calling Ocon a “pussy” in the press conference at Abu Dhabi’s following round. 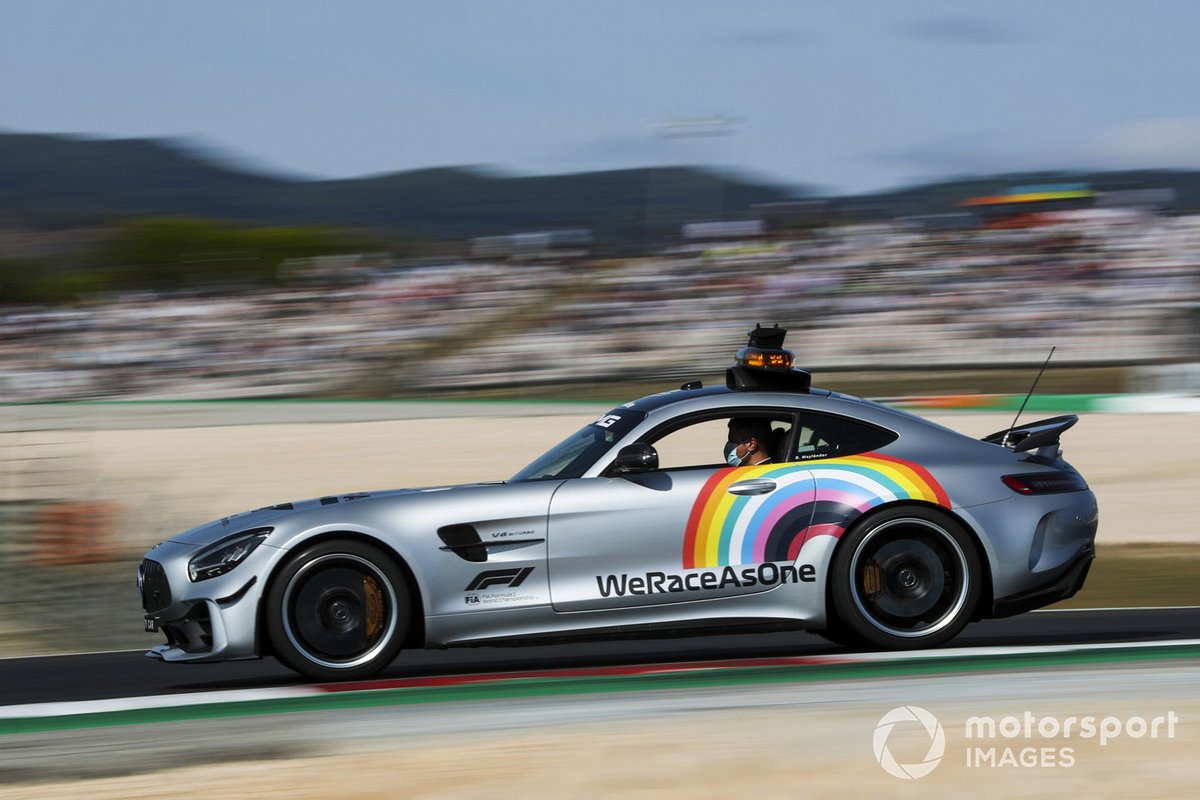 So, it falls to the FIA to punish him here too – if it chooses to. However, given the lack of attention that Verstappen’s comments have received, that seems unlikely.

But that threatens to undermine F1’s “We Race As One” initiative. Set up in the wake of the COVID-19 crisis and inspired by the global movements condemning systematic racism that followed the murder of George Floyd at the hands of police officers, F1 stated that it wished its new slogan to be a banner for the sport to fight against worldwide injustices. Yet, nothing has been done to ensure that We Race As One remains as anything more than a glib, box-ticking exercise, and seems to cement itself day by day as an empty gesture.

If F1 is truly serious about Racing As One, then it must at least reward Verstappen with some kind of punishment. In her letter, Ramsay gracefully asks for an apology, but there must be further ramifications to deter Verstappen from using such language again. Some kind of sensitivity training would be a start but, if global organisations are serious about putting an end to hate speech, they must actively put measures in place to do so.

When asked if F1 should punish slurs of this nature in a similar way to other sports, offering possible bans, Ramsay replied: “Absolutely”. She has also extended an offer to provide that aforementioned sensitivity training to F1, to ensure the drivers understand the connotations of using “mongol” as a slur.

Time on the bench for a few races would deprive Verstappen of something he loves to do – racing. It would provide a lesson in the consequences of using ableist and racist language and in how to conduct yourself which, as explained by Verstappen’s other transgressions, seems to be something he needs. There are myriad factors that can explain Verstappen’s hot-headedness, but they cannot be used to offer the driver an excuse.

In short, Verstappen used language over his team radio with offensive connotations; these are ultimately words used to direct hate at people with disabilities, genetic anomalies and certain ethnic groups. This is not something that can simply be allowed to blow over. 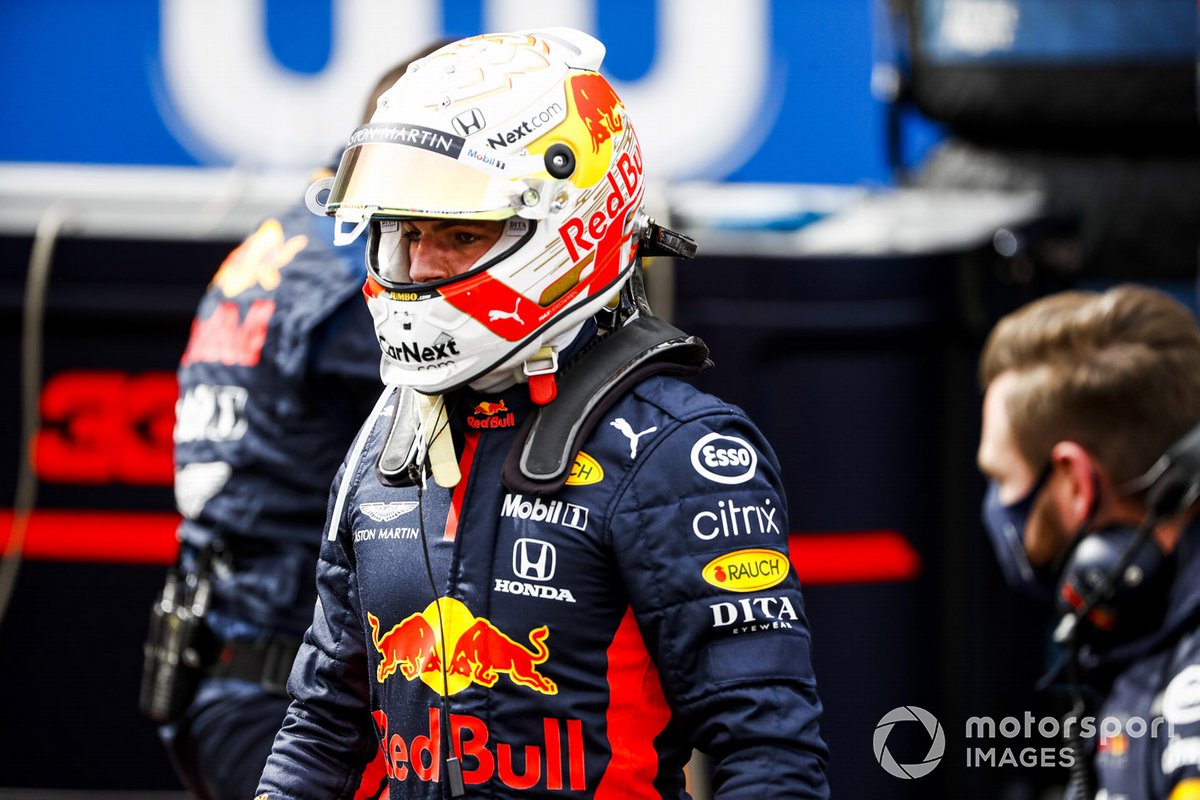