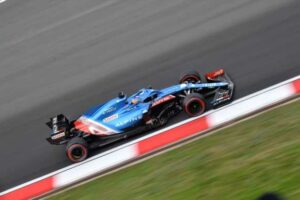 Racing at the circuit for the first time since 2011, Fernando Alonso says Istanbul Park feels the same as it did back then.

The sport returned to the track last season and it was hugely different to how it had been last time F1 raced there.

Due to the fact that it was resurfaced shortly before the race weekend, there was next to no grip for any of the drivers, causing them all the struggle hugely.

There have been so such issues this year though, as was reflected in the Friday lap times, with the fastest of FP2 being five seconds quicker than it was in 2020.

Indeed, Alonso says it doesn’t feel any different than it used to and is glad he wasn’t on the grid for last year’s edition.

“I’m happy I was not here last year because apparently it was very different and the lap times are very different as well but yeah today was a much more normal feeling.”

It was a good first day of running for the Alpine driver with him finishing in P9 and P7 in the morning and afternoon sessions respectively.

The Spaniard says the goal is to make it to Q3 in qualifying, but is wary of the threat of rain, and feels how the team handles the weather will be the key factor rather than any setup changes.

“Well I think there is always something to come and to find overnight,” he added.

“But I think it’s going to be more dependant on the weather and trying to adapt quickly to whatever conditions we find tomorrow.

The first day wasn’t quite as smooth for Alonso’s team-mate, Esteban Ocon, as while the Frenchman finished the sessions in P6 and P8, he suffered a gearbox problem at the end of FP2.

Even so, he’s feeling positive heading into qualifying.

“I think there is good performance to come from us tomorrow,” he said.

“We look competitive, both cars, and that’s good news.”