Fernando Alonso 'much happier' as Alpine moves into 'the ballpark' 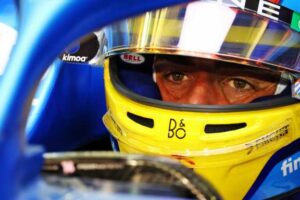 Fernando Alonso is reportedly much happier after Alpine made some alterations to the car that moved it into the right ‘ballpark’.

After the first testing run in Barcelona at the start of the month, the Spaniard was left less than impressed by the Alpine car and said that his team had not been as smart as others.

The team, like many others on the track, had issues with porpoising but seemed to get that under control in Bahrain and began putting in quicker lap times.

Although it is hard to gauge how Alpine racks up against fellow midfield teams such as AlphaTauri and Aston Martin as the team did not use DRS in Barcelona and saw its session ended early following a fire.

After the Bahrain test, Alonso was reported to be much happier with the progress of the team and now sporting director Alan Permane said the Alpine was “in the ballpark” and was slowly “getting things together.”

Now this, is something else 🤩@alo_oficial's helmet cam from the 2021 Belgian Grand Prix, stabilised 💫#F1 @AlpineF1Team pic.twitter.com/b7lA8DQWht

“Fernando was still not wonderfully happy, he still wants to go faster, he’s still finding problems with the car! But he’s happier, much happier,” said Permane, as reported by the-race.com.

“He drove a very heavy fuel load for a lot of the day. And you’ll see a jump in lap time. We put some new C3 tyres on later in the day and he said ‘wow, this car is fast’.

“He was really happy he could really feel the performance. And that isn’t on the qualifying fuel that’s on a lower fuel. But we were on full fuel before that. So he’s definitely more appreciative.

“And then once you start getting used to that level of grip and speed, you then start finding small problems there.”

Alonso reached Q3 11 times in his return to the sport last year and Permane is confident that they can improve that record in 2022.

“I wouldn’t say they are ecstatic and we’re not expecting to go out and put it on pole but I’m hoping that we will be in the mix and certainly fighting for Q3.”