Fernando Alonso 'optimistic' about Alpine's pace ahead of Monaco GP 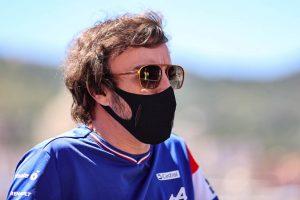 Fernando Alonso has spoken positively about his prospects for the Monaco Grand Prix with Alpine showing improved pace of late.

Alonso, winner around the streets of Monte Carlo in 2006 and 2007, has been largely outpaced by his team-mate, Esteban Ocon, and failed to beat the Frenchman in any of the four races so far this season.

The double former World Champion says he is still fighting to get back up to speed in Formula 1 after two years away, but is not feeling sorry for himself as he accepts he “needs to deliver” on track.

With the Monaco Grand Prix taking place in front of a limited number of spectators following a year off the calendar in 2020, Alonso is expecting a changed atmosphere around Monte Carlo.

“It is a different Monaco [without fans] at the end of the day, but when we close the visor and go racing in practice, everything will feel quite familiar to all of us,” the Spaniard told Sky Sports ahead of the weekend.

“It’s a little bit shorter practice this year compared with previously, so we have to maximise every lap and have a smooth weekend because if you stop the car in one of the practice [sessions] it will put you on the back foot.

“So it’s a challenge for everyone and we should be ready.”

The 39-year-old has plenty of experience around the Principality and says drivers still need to build up confidence bit by bit throughout practice to extract the most performance from their cars.

With Alpine having seemingly made strong improvements to their A521 in a short space of time in the opening rounds of the season, Alonso feels the car may have the required characteristics to have a competitive weekend in Monaco.

“I’m quite optimistic now from what I felt in the car in the first four races. I think it could adapt quite well to Monaco, but you never know,” he added.

“It’s a place where you need to build the confidence as well. You have to be able to attack, you have to trust the car.

“That’s something you only discover when you’re in the middle of practice, so I’m a little bit curious to see what is our level of trust in the car, but I’m optimistic.”