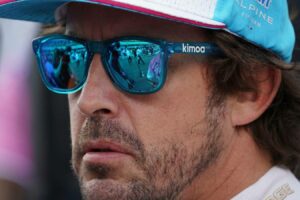 Fernando Alonso has claimed all Formula 1 drivers remain concerned about the Race Control process, which was changed for this year.

After the controversial end to last season, the FIA replaced race director Michael Masi with two new incumbents who would rotate in the role.

Niels Wittich has been in the hotseat so far, but Eduardo Freitas is due to take over for the Spanish Grand Prix with his F1 availability having been reduced up to now by pre-existing commitments with the World Endurance Championship.

Also involved in decision-making is experienced Herbie Blash while another veteran, Colin Haywood, has been on hand too, and the FIA announced a football VAR-style system would be introduced for the 2022 campaign.

Although majorly contentious moments have so far been avoided, a serious issue did emerge at the Miami Grand Prix where Carlos Sainz and Alonso’s own team-mate Esteban Ocon crashed into the same concrete barrier on different days, and their calls for Tecpro to be installed went unheeded.

Speaking ahead of the Spanish Grand Prix in an interview with publications including AS, Alonso said worries remain among the competitors about the standard of officiating on race weekends.

“We have to give Miami time,” said the Alpine driver in response to a question about criticisms that were aimed at that event regarding the track surface and safety barriers.

“The weekend was very good overall for F1, with the expectation and the guests that were there – it shows the growth of popularity in the United States.

“I give it good marks, although I’m sure there are things to improve and tweak after the experience of the first race. That happens at all circuits.

“Probably the most worrying thing is the race direction and the stewards. With all the changes that have taken place, they haven’t adapted too well and it’s a concern for all the drivers right now.”

The Spaniard also reiterated the opinion he had offered before Miami that the new F1 regulations are not achieving as much as had been hoped in terms of shuffling the order.

“The category needs to be more equal,” said the 40-year-old former double World Champion. “Following each other, and being able to overtake, has improved.

“But there are still huge differences between the teams and that was not the aim of the new rules. All the teams would have common parts and there would be more equality and different race winners.

“If you put a Red Bull or Ferrari last, they are on the podium like last year with Mercedes. They can overtake anywhere. But because we start in qualifying order there is little overtaking.

“The big challenge of F1 is that with the cost reduction, the salary ceiling and the common parts, there is still a two-second gap between first and 12th in the race. It’s the only category with a two-second gap.”