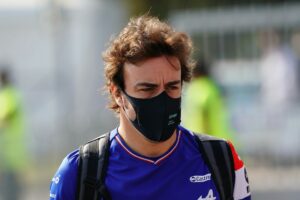 Fernando Alonso says the biggest situation Formula 1 must address currently is the predictability at the top of the order.

Mercedes have dominated Formula 1 since the new turbo-hybrid engines were introduced in 2014 and while Red Bull have now joined them in the title hunt, it remains that duo clearly ahead with the midfield pack then left to scrap it out behind.

We have already seen some upset results in 2021, with the midfield pack moving closer to the leading pair, although it remains difficult for a midfield team to make the podium on merit.

There are signs of an improvement, with Daniel Ricciardo leading home a McLaren one-two at Monza, so now Alonso wants to see other midfield outfits in with a fair shot of challenging for the podium. Formula 1 plans to make this possible with the new generation of cars for 2022.

Since returning at the start of the 2021 campaign, P4 at the chaotic Hungarian Grand Prix has been Alonso’s best result.

“What I think we need to address now, and next year may be the first step in that, is the difference between the cars,” Alonso is quoted as saying by Motorsport.com.

“If you are lucky enough to be in a competitive car right now, you are only fighting with your team-mate, not another team.

“That’s something we need to address as a sport, so it becomes more open and everyone can fight for the podium one day. At the moment, that’s not possible.”

While Formula 1 is seeing a bright crop of young stars impressing in the midfield, Alonso is at the other end of the scale as one of the series’ most experienced and proven talents.

But he says in a series like Formula 1 that constantly evolves, there is always a learning process going on.

“You learn so much along the way about how to deal with different situations,” said the Spaniard.

“You don’t have much use for the experience from the junior classes at that time, partly due to the big difference with the course of events in Formula 1.

“In the first three or four years, you keep learning about the system and how everything works.

“Then you start the next step, which is probably learning how to maximise the potential of the car. It’s no longer about driving at the maximum, like you did in the karts or junior classes. Here you have to deal with other problems and scenarios in the race, such as tyre management and strategy. Those are things you have to keep doing well every weekend.

“Eventually, you get to a point where you get better every race and every time you get in the car, because you learn more about the car and because the team helps you develop your driving style, specifically for that year, that tyre and that aero configuration.

“The next year everything is reset and you have to learn some things again. So you are constantly improving yourself as a driver.”