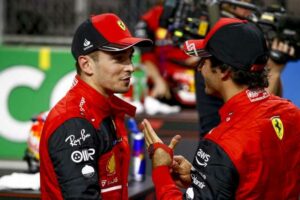 Despite Charles Leclerc emerging as the driver to beat in the early rounds of this season, Mattia Binotto says Ferrari are “not managing” the championship as it’s only three races in.

After two seasons without a single grand prix win, Leclerc has bagged two in three races to give Ferrari the lead in both championships.

The Monégasque driver is sitting on 71 points, 34 ahead of George Russell, with Ferrari 49 ahead of Mercedes in the Constructors’ Championship.

It is the first time since 2018 that Ferrari have found themselves leading the standings.

That year Sebastian Vettel was ahead of Lewis Hamilton after 10 rounds only to lose the Drivers’ title nine races later when the Mercedes driver took an unassailable lead. Mercedes also won the teams’ trophy.

With that in mind, Binotto has refuted suggestions that Ferrari are in a position to ‘manage’ the title race.

“We are not managing the championship,” said the Italian. “It’s only three races.

“We stay focused on every single race and that is the way we will approach. That one was great. In all truth, to do a good weekend and to win you need to be perfect.

“That was the case in Bahrain, because it was always very tight. We were not perfect in Jeddah and we lost. Here, again we have had a great weekend and that is how we need to approach it.”

Sunday’s win was Leclerc’s most dominant of the season to date, the driver taking the grand slam with pole position, fastest lap and the race win.

He never once relinquished the lead even when he came in for his one pit stop of the race, and took the chequered flag by 20s ahead of Sergio Perez.

“We are happy because a victory is always good,” said Binotto. “At the start of the season, the car and the drivers are proving to be very competitive.

“We want to focus on ourselves and approach each race as a new race. To win you have to do everything right.

“To do well in difficult conditions, like here in Australia, is always a great satisfaction. The credit goes to the group, we all worked by staying united and trying to raise the bar, and the fruit of the work it shows.”

Next up on the calendar is the first of Ferrari’s two home races, the Emilia Romagna Grand Prix at Italy’s Imola circuit.

“We can’t wait to get there, in this moment of form and in front of our fans,” added the team boss. “The hope is to be able to celebrate this moment with them. We will face it trying to give our best. I have great memories linked to the track, we can’t wait.”