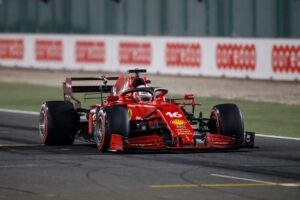 Ferrari’s lack of engine degradation meant they did not consider a new one for Charles Leclerc despite his poor grid slot in Qatar.

The Monegasque driver was unable to clear Q2 upon Formula 1’s first visit to the Losail International Circuit, leaving him to start the race from P13 on the grid.

As he was already comfortably out of position by his usual standards, Ferrari could have given him a new Internal Combustion Engine, which would have incurred a five-place grid penalty, or a complete new power unit that would have sent him back only two further places to P20 and last.

However, team principal Mattia Binotto explained Ferrari do not suffer with degrading engine power like other manufacturers and so the idea of giving Leclerc a new engine was “irrelevant”.

Asked by Sky Italia if that had been a good opportunity for Leclerc to take a new power unit, Binotto replied: “It’s irrelevant for us. We introduced a couple races ago this upgrade on the hybrid part. Our engine is reliable, it does not degrade with mileage. So there’s no reason to change it.”

Ultimately, Leclerc recovered to cross the line P8, a result Binotto said would have become out of reach with an engine penalty.

“If we had changed the engine, he would not have reached P8,” he stated.

Leclerc followed his team-mate Carlos Sainz across the line, with that P7 and P8 finish scoring the team a vital 10 points for the Constructors’ Championship.

Ferrari’s rivals for P3 in the Constructors’, McLaren, scored only two points thanks to a P9 for Lando Norris, who had been running P4 before suffering a puncture.

Sainz and Leclerc played it safe with their tyres to ensure a points finish, leaving Binotto to reflect on a strong execution of their strategy.

Asked if it had been a Qatar GP below Ferrari’s expectations, Binotto said: “No, I wouldn’t say below expectations.

“It’s clear P7 and P8 are not what you aspire to. But we knew this was a difficult track for us for tyre wear.

“This is the car with which we suffered so much wear at Paul Ricard – the car hasn’t changed in that regard. But I think we learned to manage it, for sure better than at Paul Ricard.

“From the first lap we asked the drivers not to push and try to do only one pit-stop. So they held back in their driving, they didn’t push neither in the first stint with the medium tyres nor later with the hard tyres, but just 10 laps from the end when we knew we could arrive at the end with the tyres intact.

“And I have to say it worked, if you look at others who instead pushed when there’s no need to do that and they got a puncture.

“So credit to the team for being able to manage the tyres. It’s clear the car has a wear problem so we couldn’t push more, but the team was able to handle that and this is the positive side.”

There was a slight hiccup for Ferrari in the pits, but Binotto was nonetheless encouraged by his team’s all-round performance.

“The double pit-stop, unfortunately there was a communication problem via radio with Carlos, otherwise he would have been ahead of [Lance Stroll after the pit-stop and he could have attacked Esteban] Ocon at the end and achieve a better result,” Binotto stated.

“But apart from this radio problem the guys handled the double pit-stop very well after three races in a row, with a chassis change between Saturday evening and Sunday morning.

“And both the drivers too did a good race. What we lack now is a fast enough car to compete for better positions.”

This season, P3 is the best Ferrari can achieve, but being 39.5 points ahead of McLaren they go into the penultimate round in Saudi Arabia with an extremely healthy advantage.

It will be Formula 1’s first visit to the Jeddah Street Circuit, and Binotto believes low downforce will be the way to go on what is being billed as F1’s fastest street track.

“It will be a very fast track. We did our simulations in preparation, we will race also with low downforce so also with very high top speed,” the Ferrari boss revealed.

“It will be for sure a very different track, very difficult to read and very fast. We are all very curious to go there.”