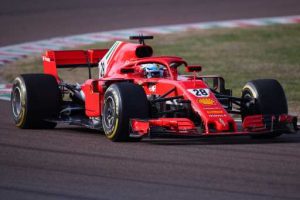 For Giuliano Alesi his Ferrari test alongside FDA colleagues was a farewell drive as the Frenchman now departs the program.

Son of former Ferrari driver Jean Alesi, Giuliano took to the Fiorano track on Monday alongside Marcus Armstrong and Robert Shwartzman, also from the FDA.

It was a cautious opening stint for the 21-year-old in the low temperatures, with even a few snowflakes falling, before he switched onto the slick tyres.

Giuliano was sporting the number 28 on the SF71H, the same number which his father had when driving for Ferrari in 1991.

And following the session Ferrari confirmed that Alesi would be leaving the program “as he prepares for his next move which will see him tackle an important race programme in Asia”.

Speaking to the Ferrari website, Giuliano said: “I’d like to thank Ferrari and the FDA for this fantastic opportunity today.

“To be able to get in the cockpit of the SF71H was incredibly exciting as was driving the car on track with my father watching and sporting the same race number he used.

“In terms of handling, the car is not too difficult to drive, but the power was surprising and never seems to end. The immediacy and efficiency of the braking is also impressive.

“This test was the best way possible for me to bid farewell to Ferrari. Now a new adventure awaits me in Asia and I can’t wait for it to start.”

Jean Alesi added: “I am thankful to Ferrari for giving my son Giuliano the opportunity to drive this car.

“It is the most important day in any driver’s life. Thanks to everyone and forza Ferrari!”

History repeating itself. 30 years after Jean, it’s now time for Giuliano #Alesi to get his first laps in a #Ferrari #F1 car 🤩 #FDA @ScuderiaFerrari pic.twitter.com/NqBka8tACb

Just a few months ago Giuliano departed the Formula 2 series, with Jean saying that the budget was no longer there to fund his son.

“We have no sponsors for 2021, Ferrari has fired him from the Academy and I can no longer raise private funds. I sold my Ferrari F40 myself,” Alesi was quoted by Soymotor.com as having told Swiss newspaper Blick.