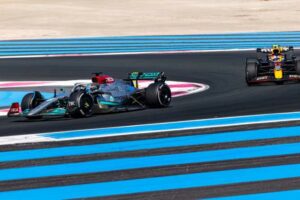 With Sergio Perez confused by the ending of the Virtual Safety Car late in the French Grand Prix, the FIA insists everyone had the same information.

The VSC came into play on lap 50 of 53 as Zhou Guanyu parked his Alfa Romeo with a technical issue.

At the time George Russell was right behind Perez’s Red Bull, the two having had a moment a few laps earlier at Turn 8 when Russell dived down the inside of the Red Bull, forcing Perez wide.

The Briton felt Perez should have been made to give him back the position, annoyed by the situation and looking for any opportunity to attack.

That came as the VSC ended, Russell taking all off 15 metres to fly past the sleeping Perez.

The Mexican driver says he was “caught out” by confusing messages from Race Control.

“I don’t know what was going on with the Virtual Safety Car,” he told Sky Sports after the race.

“I just got caught out with it, because it was telling me it was ending already from the exit of [Turn] 8. It ended up at the end of [Turn] 15.

“So there was something going on there and I got caught out with it.”

The FIA has defended itself.

“A second VSC-ending message was sent due to a hardware issue,” they said in a statement, “which led to an automated switch-to-backup-systems that worked exactly as they should in that scenario.

“The same information is supplied to all teams concurrently. The VSC ending countdown time to the green light being displayed on the trackside panels is always random.”

Usually when the VSC is about to end an ‘ending’ message appears and the track goes green after a short, but random, time.

On Sunday the ending period went a bit long because of the hardware problem.

Russell relished his opportunity to attack, handing Mercedes their first double podium of the championship.

“I knew that would be a massive opportunity for me,” he said. “Checo was a bit all over the place during the whole VSC, so I knew that if I timed it perfectly and I got the run on him, I might have an opportunity.

“I think he was kind of braking to make sure he was still above the delta time while I was accelerating and it gave me that run to overtake him, so that was satisfying.

“I just saw the opportunity and went for it. Great to slip past him. I was a bit disappointed not to keep the position when I did my first overtake on him.”