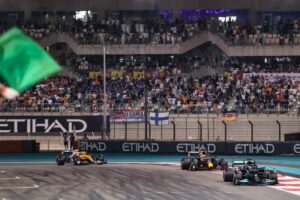 An FIA statement has revealed the timeline for their investigation into the controversial climax of the Abu Dhabi Grand Prix.

But if, as has been reported, Lewis Hamilton is awaiting the findings before deciding whether to continue in Formula 1, he will be even more frustrated – the decisions will not be announced until March 18, the day of free practice for the 2022 season-opening Bahrain Grand Prix.

Hamilton has remained silent since a short interview in parc ferme at Yas Marina after relinquishing his Drivers’ World Championship crown to Max Verstappen, following some highly contentious decisions by race director Michael Masi in the closing stages of the year’s final grand prix.

The Mercedes team failed with two separate protests on the day and then opted not to continue an appeal process, that decision having been announced only hours after the FIA declared a full analysis of what had unfolded would be held.

Various unconfirmed reports have emerged in the last few days about what the study would comprise, when and by whom, and now some specific details have emerged by way of an FIA statement.