FP1: Mercedes back on top as Bottas leads 1-2 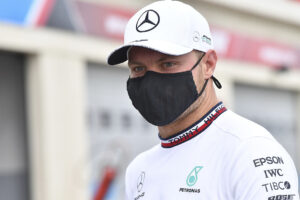 Mercedes’ response to two dire race weekends in a row is a positive one as Valtteri Bottas headed up a Silver Arrows 1-2 in FP1 at the Paul Ricard circuit.

Red Bull find themselves in control of both World Championships after Mercedes suffered not one, but two setbacks at street circuits in the form of Monte Carlo and Baku.

But, now back on more comfortable territory at a traditional race track, the Silver Arrows are off to a good start in their mission to bounce back in the World Championship battle.

Bottas, with rumours about his Mercedes future continuing to swirl, topped the timesheet with a 1:33.448 which was some three tenths clear of his team-mate Lewis Hamilton. Max Verstappen rounded off the top three, less then a tenth behind his title rival.

Elsewhere, there was early promise from Alpine, McLaren and AlphaTauri as they occupied the rest of the top 10 slots, with Red Bull’s Sergio Perez occupying the other spot in P4.

With all the talk leading up to race weekend about Mercedes driver rumours and the continued fall-out from the Pirelli tyre blow-outs in Baku, the focus was finally back on the race track at the Paul Ricard circuit with the first practice session of the weekend.

And, it was quite an eventful start to proceedings as Mick Schumacher spun off at Turn 3 and AlphaTauri’s Yuki Tsunoda got caught out at the last corner preparing for a hot lap.

Sebastian Vettel also damaged the rear of his AMR21 car with a huge slide off at Turn 11 and was stuck in neutral initially before  eventually being able to limp back to the pits for repairs.

Just before that, there was also an early setback for Valtteri Bottas after picking up wing damage by going over the sausage kerbs at Turn 2.

In a radio message played via the world feed, Mercedes expressed their dissatisfaction with the placement of the sausage kerbs at that particular corner.

Bottas clips his own wings going over the kerbs out of Turn 2, and returns to the pits with damage#FrenchGP 🇫🇷 #F1 pic.twitter.com/I7p4UQWgab

Meanwhile, as a few drivers were licking their early wounds, a Mercedes v Red Bull battle began at the top of the timesheet with Max Verstappen, Lewis Hamilton and Bottas, once a new front wing was fitted, all trading blows in the fight for P1.

After their first proper hot lap attempts on the soft tyre, Bottas lowered the benchmark with a 1:33.448. That put him three tenths clear of Hamilton, who in turn was 0.097s ahead of Verstappen.

Following a front wing adjustment, Verstappen looked on course for a good lap after going quickest of all through the middle sector – but he ultimately backed off after going wide in the final sector.

The rest of the session passed without any more major incident, although Verstappen was notably still wrestling with the balance of his RB16B.