Home » Racing » Fred Vasseur's response to "was it Alfa Romeo or Ferrari?" question after Bahrain

Fred Vasseur's response to "was it Alfa Romeo or Ferrari?" question after Bahrain 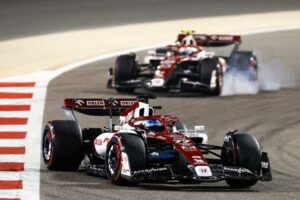 Fred Vasseur was not overly impressed by suggestions Alfa Romeo’s double points haul in Bahrain was down to their Ferrari engine.

He said just like he would not share the blame when Alfa Romeo struggled last season, he will not share it now the points are rolling in.

That was only four points fewer than they scored in the entire 2021 championship, a season in which Alfa Romeo opted against updating their car and instead focused entirely on designing this year’s C42.

This season, Ferrari and their customers have a brand new engine powering their cars, the updated power unit said to have closed the deficit to Mercedes and Honda (now Red Bull).

Bottas lined up P6 on the grid but it went horribly wrong for the former Mercedes driver off the line.

The Finn lost eight positions, falling to P14 on the opening lap, and initially struggled to recover.

While it looked as if it would be a dismal start to his season, as the laps counted down he began to work his way back up the order.

He finished P6, the same position he had lined up on the grid.

Zhou made a late charge into the points, P10 at the chequered flag.

“It was a very good result. We had a decent qualy and the pace was I think amazing,” said Vasseur.

“The only issue was Valtteri lost 12 positions, or something like that, on lap one and it was difficult to recover.

“Overall it is a very good result for the team – two cars in the points, the first point for Zhou and I’m very pleased for him also because he did a great job all weekend. ”

Pressed as to what had gone wrong for Bottas off the line, the Alfa Romeo team boss said they would have to investigate the issue but he was confident it would be a quick fix.

“I think he was on the right-hand side and had too much wheel spin and then he lost a bit of momentum on lap one,” said Vasseur.

“But okay, we have to fix it, understand what happened exactly.

“We didn’t do many starts [in testing] with the car and Valtteri but I think we will fix it quite soon.”