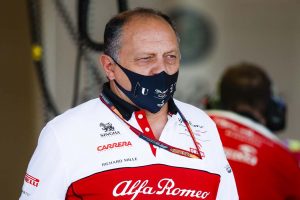 Alfa Romeo have confirmed that team principal Frederic Vasseur has tested positive for COVID-19 and will thus miss pre-season testing.

Every member of the Formula 1 paddock is required to get tested on a regular basis, and it was in one of these tests that Vasseur got a positive result.

He immediately self-isolated after it and took another test two days later which had a negative result. He also hasn’t displayed any symptoms.

Nevertheless, the decision has been made for him to stay at home rather than travel to Bahrain for testing, and carry out his duties remotely.

“In the interests of safety of Mr Vasseur himself, the team, all fellow competitors and the whole community and in respect of French regulations, Mr Vasseur will not travel to Bahrain and will continue operating from home for the next seven days, as required by the local authorities,” the team said in a statement.

“Mr Vasseur will be fully operational and connected to the garage for the duration of the test, and no deputy team principal will be named, with no further impact predicted on our operations this week.”

Vasseur is the 12th high-profile name in the F1 paddock to test positive for the virus and the third team principal after Toto Wolff and Simon Roberts.

However, as the 2021 season goes on, infections could became far less regular.

The Bahrain circuit has offered to vaccinate all F1 personal, and while the sport stated they didn’t want to jump the queue, Ferrari have accepted the offer.

According to Gazzetta dello Sport, Ferrari team members have already started receiving the first of two Pfizer-BioNTech jabs, with the second to be administered before they return home.

It was also reported that “Mercedes have proposed the same opportunity to their employees and many of their team on the road will be vaccinated”.

As Leclerc has already tested positive once and thus has antibodies already, he won’t be amongst those Ferrari members getting the jab, but Carlos Sainz most likely will be.