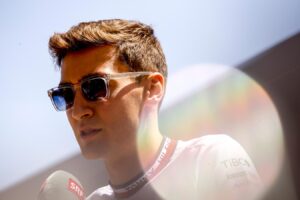 George Russell admits Mercedes are well off the pace being set by Red Bull and Ferrari – and could even be troubled by Alfa Romeo and AlphaTauri.

Russell ranked P4 in second practice in Bahrain on Friday, but was left sceptical about how Mercedes will stack up compared to the rest of the field.

Lewis Hamilton was heard on team radio complaining of the continued ‘porpoising’ occurring on his W13 and could not match the best efforts posted by both Ferrari and Red Bull drivers.

Russell said the team will crunch the numbers and try to find solutions where they can ahead of qualifying, but said they could come under threat from midfield teams behind them.

“I think it’s clear. It’s all about lap time and we are certainly not where we want to be,” said Russell on Sky Sports F1 after FP2.

“I think we made a bit of progress resolving some issues but the pace is just not there at all at the moment, so we need to really go over the data tonight to understand where we are both struggling a bit with the car.

“We are a long way off the pace of Red Bull, Ferrari, even the likes of AlphaTauri [and] Alfa Romeo seemingly on our pace or even quicker. So we’ve a bit of work to do.”

When it was presented to him he had finished in the top five in practice, Russell insisted that was not the main barometer for the weekend.

“But that’s one lap,” he responded. “I don’t think you can read too much into one lap. I think the high-fuel pace is a bit more representative and we were consistently over a second slower than where our rivals are.

“I need to look into the data a bit further. Maybe there’s a reason for it, but from our side we are definitely not overly happy with the car right now.

“We’ve got some work to do but if anyone can, our team can. So let’s see.

“We are truly throwing everything at it at the moment to try and unlock the potential we think is there but we are just really struggling to tap into at the moment.

“Everything we try is maybe one step forward, two steps back – there’s always a bit of a limitation.

“It will take time. We all hoped we could have solved it for this weekend but how things stand at the moment, we aren’t in the fight and we’ve some work to do.”