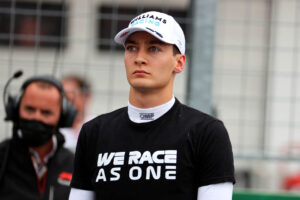 Ralf Schumacher believes seeing George Russell test a Mercedes in Hungary was a “clear indicator” he will be driving for the team next season.

The current Mercedes junior driver was behind the wheel after the race at the Hungaroring as he completed almost two race distances in the World Championship-leading car by running in the latest Pirelli 2022 tyre test.

Although it is widely assumed Russell is the main contender to take Valtteri Bottas’ seat at the team if the Finn is not retained, Jacques Villeneuve recently said he feels Lance Stroll could also be in the running to take a seat with the Silver Arrows.

Aston Martin are linked with Mercedes through their engine partnership, as well as Lawrence Stroll being friends with Toto Wolff, which led the Canadian to the potential conclusion that the two teams could do a driver swap next season.

“For me he [Bottas] could move to Aston Martin in place of Lance Stroll, who would go to Mercedes,” Villeneuve said to Libero Quotidiano in Italy.

“Stroll senior’s dream, very close to Toto Wolff, is to see his son winning championships. And Toto needs a place for Valtteri.”

Schumacher, meanwhile, does not buy into the 1997 World Champion’s train of thought around the young Canadian, instead believing Russell’s presence in the W12 in Hungary’s tyre test is a key indicator for who will be driving alongside Hamilton next season.

With 2022 tyres being tested, Russell being behind the wheel of the car he may be driving next year would appear to make logical sense, according to the German.

That’s @MercedesAMGF1 and @GeorgeRussell63 heading home from the @HungaroringF1. A total of 137 laps and a good feel for what next year’s #Fit4F1 18-inch tyres are going to be like. @F1 @fia pic.twitter.com/cKyvwKjumY

“It’s true that [Lawrence] Stroll and Wolff are close buddies. But how far would they go? I don’t think Lance Stroll plays a role at Mercedes. I think that’s where Russell is seated,” the six-time grand prix winner said to Auto Bild in response to Villeneuve’s comments.

“It is no coincidence he is driving the tests for Mercedes with the new 18-inch tyres that will be used next year. For me, this is a clear indication.”

When it comes to the future of Bottas, he has already reportedly opened talks with other teams surrounding a seat for next season should he not be retained by Mercedes, and the former Williams and Toyota driver thinks he can see three logical moves for the nine-time race winner.

“Toto will try to move him to another place.” said Schumacher. “First I see Alfa Romeo and Williams, but of course there is also a connection to Aston Martin.”