George Russell: Pretty crazy to be P2 in the Drivers' Championship standings 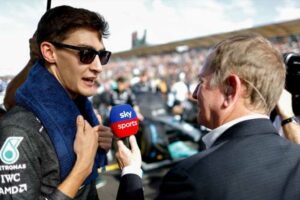 George Russell finds it “pretty crazy” that he sits second in the Drivers’ standings, but says championships are based on “results and not necessarily pace”.

Joining Mercedes from Williams, Russell had hoped to find himself in a position to challenge for race wins and potentially even the World title.

That, though, looks unlikely at this point given Mercedes’ early season troubles.

The Brackley squad’s interpretation of the all-new technical regulations is causing them a few headaches, most notably when it comes to porpoising.

The W13 seems to suffer with that more than its rivals, forcing Mercedes to raise the ride-height which is costing them downforce and pace.

And yet somehow Russell is still P2 in the Drivers’ Championship.

Finishing third at the Australian Grand Prix, he climbed from fourth to second in the standings, moving ahead of Carlos Sainz and Max Verstappen.

GPFans quotes Russell as having told Sky Sports: “Somebody told me that and I didn’t believe them.

“It’s pretty crazy to think but this is a championship based on results and not necessarily based on pace.”

Only four drivers have earned points from every round so far this season 👀#F1 pic.twitter.com/3bmeK1BC7G

Russell and Mercedes have benefitted from Red Bull’s lack of reliability, Verstappen twice retiring in three races while running up in second place.

That had the Briton saying after Australia that it “does not matter how fast your car is if you don’t make it until the end”.

Mercedes are making it to the end, the only to have both drivers score in all three of this season’s races.

Russell, though, concedes holding onto P2 will take a massive effort from Mercedes, who need to improve their W13.

“We know if we want to keep that position we need to find more performance in the car and I believe in my team back at base to be able to bring more performance but it’s going to take a lot of time,” Russell added.

“For the time being, let’s just keep capitalising.”