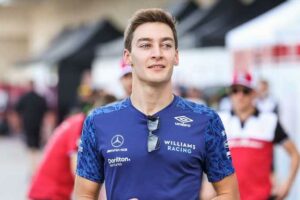 The penalties are already beginning to rack up ahead of the United States Grand Prix with George Russell the latest to have a new engine fitted.

Aston Martin driver Sebastian Vettel had already confirmed that he was due to have a new Mercedes power unit fitted ahead of final six races of the season and the same can now be said of Russell, who is also moving on to a new Mercedes engine that will hopefully last him until the end of the 2021 campaign.

The United States Grand Prix is somewhat of a second home race for Williams, with their owners, Dorilton Capital, being an investment firm based in America.

And that means Russell is not only going to be busy on the track this weekend, but off it as well.

“They’ve got a huge amount of guests here this weekend and they’ve got a lot in store for us,” Russell told reporters ahead of the race weekend in Austin.

“So they’re certainly pretty pumped about it but generally, this circuit, this place is really exciting. It probably is my favourite race weekend of the year other than Silverstone.

“Just coming here, it’s a great place, great atmosphere and Austin itself is a cool place.”

Prior to first practice, Williams has also announced the arrival of Logan Sargeant to their driver academy. The 20-year-old American racer recently finished P7 in the 2021 Formula 3 campaign.