George Russell warns porpoising 'far from over' despite none in Canada 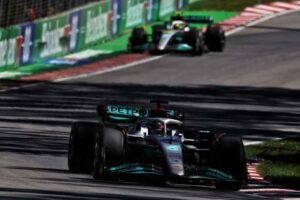 George Russell has said that the “global issue” of porpoising hasn’t disappeared, despite no apparent problems in Canada.

Porpoising was the hot topic coming into Canada, following the severe cases seen during last weekend’s Azerbaijan Grand Prix, as the FIA announced measures to reduce the effect ahead of Montreal.

The immediate changes included allowing the teams to run an additional floor stay in a bid to improve floor stiffness, which Mercedes evaluated during Friday practice – electing not to run with the stay in place.

Despite this, and the bumpy nature of the circuit, Russell said the W13 hadn’t displayed any of the symptoms of porpoising during the race.

“It was bumpy, it was definitely bumpy out there,” he told Sky F1.

“We weren’t porpoising, we were just bouncing around a lot down the straight and just hitting the ground. So it’ll be a good sleep tonight again for sure.”

Asked whether Mercedes, as one of the most affected teams, have got on top of the issue once and for all, Russell explained the phenomenon is likely to crop its head up depending on the characteristics of the individual track and event.

“No, I think there are so many different factors,” he said when asked whether porpoising is now in the past.

“The wind is a big factor, the bumpiness of a circuit. The revisions that the FIA brought this weekend, with that extra floor stay, did nothing, hence why we didn’t race it. Just the angle of it didn’t allow the team to hold the floor up. But yeah, this global issue of these 2022 cars is far from over.”

Mercedes team boss Toto Wolff even joked that the team might be going into the “asphalt-laying business” to offer to re-pave F1 circuits in a bid to improve the surfaces to their liking.

With Mercedes on top of the porpoising and showing much improved performance, Lewis Hamilton came home in third place to secure his second podium of the season, with Russell coming home in fourth.

Having started from eighth after a Q3 mistake prevented him from putting in a final run, Russell said he was happy with how his race had played out.

“I had total confidence we would have been able to carve away past the Haases and the Alpine,” he said.

“We were certainly concerned that [Charles] Leclerc and Checo [Perez] would be able to come through and [we were] fortunate to keep them behind us and, ultimately, our race pace was certainly closer to Ferrari and Red Bull than we’ve seen all season but the inherent performance isn’t there yet.”

Having elected not to pit during the first Virtual Safety Car before diving in under the second at the end of Lap 19, Russell said he didn’t think there was much he could have done to improve his finishing result.

“Everything’s easy in hindsight,” he said.

“I probably would have liked to have pitted under the first VSC but, at the end of the day, I don’t think it would have changed my finishing result.

“The pace was really strong in the first stint and the second stint. [In the] final stint after the restart, I don’t know why but I just couldn’t get the tyres working. So that was a bit of a shame to drop back slightly and not be in the fight but, nevertheless, P4, good points for the team and great to be back on the podium as Mercedes.”