Home » Racing » Guenther Steiner jokes: Imagine where Haas will be with upgrades!

Guenther Steiner jokes: Imagine where Haas will be with upgrades! 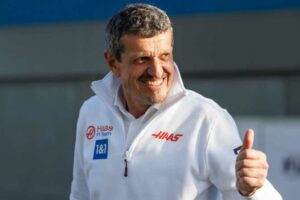 Haas’ Guenther Steiner has joked about his team’s potential once they roll out some updates for their VF-22.

Haas’ recent run of form has been impressive, with a double points finish at Silverstone quickly followed up by both drivers scoring in the Austrian Grand Prix.

That is despite the VF-22 having received no updates since the season began, unlike the vast majority of the field who have rolled out update packages for their machines – most having done so for the Spanish or British Grand Prix.

Haas opted to sit on their updates, pushing back the introduction of the new components from the race in Barcelona until the Hungarian Grand Prix later this month, and Steiner joked the sky is the limit for the team going forward.

“Can you imagine if we had upgrades where we are?” he laughed, speaking on the F1 Nation podcast.

“I always say upgrades are overrated, in my opinion, and we will bring some in Hungary – hopefully they will work as they should work. I don’t always follow what the others are doing, you need to go your own way, and we decided in Barcelona not to bring anything just to bring them because it wasn’t good enough.

“We developed more and hopefully, when we bring them in Hungary, they will work.”

Having found pace and form with a very raceable car in 2022, a huge step forward from their disastrous 2020 and 2021 seasons, Steiner said there is a chance his team could fight for points at every race for the rest of the year.

“It’s very good, very good for the team,” he beamed.

“We didn’t think we would finish this strong [in Austria], we knew we were going good but this strong? It’s very good, especially after Silverstone – double points in the sprint and double points again [on Sunday], it’s fantastic.

“The performance in Spielberg was particularly good for us, which was of course a bit unexpected. But to be honest, I think we can score points in every race.”

Part of Haas’ uptick is down to Mick Schumacher taking a step forward and emulating the performance level of Kevin Magnussen, with Steiner saying the young German driver has made changes to his mindset in recent events.

“I saw a little change in Canada, I don’t know why. I just saw he was a little bit more relaxed about things,” he said.

“I think maybe more confident. From there onwards, he was just more at peace with himself, maybe not pushing too hard, just trying to get the best out of the car what he could.”

Schumacher was annoyed with Haas after Saturday’s sprint, scowling as he spoke to media after feeling his race had been compromised by Haas not releasing him past Magnussen in front – the German eventually losing out to Lewis Hamilton as a result.

Steiner said Schumacher was appeased by Haas’ explanation of their reasoning once the adrenalin had worn off.

“I think we managed it [on Saturday] for the team in the right way,” he explained.

“For him, it wasn’t right – we explained it to him why we did what we did and there was nothing sinister behind it. You saw [on Sunday] when Kevin had an issue with his engine, we let Mick go because we knew Kevin was not 100% on power so we let him go and he fought very well.”