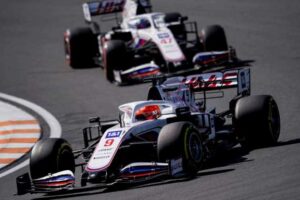 Guenther Steiner has backed Nikita Mazepin in his latest feud with Mick Schumacher, saying his move on the German was not a “nasty” one.

Following their qualifying antics in which Mazepin felt Schumacher had been “cheeky” in passing him as they queued, the Russian driver made it clear he would not “tolerate” that sort of behaviour.

He told F1-Insider: “I don’t like people who are cheeky and who show their true nature in the battle for 19th place. As long as I drive in Formula 1, I won’t tolerate that.”

A day later the tables were turned with Schumacher left angered by his team-mate’s actions.

Racing for position at the start of the Dutch Grand Prix, Mazepin moved across the track to cut off Schumacher, the German having to pit for a new front wing as a result.

“If I already had my front nose there I think it’s a bit late to then swerve and basically push me into the pit lane,” said the irate German.

Schumacher says he expects “consequences” to follow. Steiner, though, feels both drivers share a part of the blame.

Asked if like Schumacher he felt the move was dangerous, Steiner told Motorsport.com: “I think you can always say it’s dangerous.

“You can avoid danger. I don’t think it was a nasty move, to be honest. I looked at this scenario and it takes always two to tango.”

After a testy weekend for the Haas pairing, Steiner now faces the challenge of calming his drivers before they head to the high-speed Monza circuit.

Stating that “not one [person] to be blamed” for the breakdown in the relationship, Steiner added: “We need to work on it, to be constructive.

“We had a meeting after our engineering debrief about it. We haven’t come to a conclusion.

“The plan is to meet before Monza and to see what we need to do to avoid this in future, because it doesn’t help anybody. I tried to explain that one.

Schumacher, though, fears there is little sign that the team-mates can come to a resolution.

“I don’t think so, to be honest,” he said when asked if he can ‘talk the situation through’ with Mazepin.

“It seems like he has this thing in his head where he wants to, by any costs, be in front of me.

“That’s okay, I haven’t anything against it. But I think if we go to the point where we defend very aggressively, against a team-mate where you don’t have anything to gain, I think that is maybe not the right approach.”