Home » Racing » Guenther Steiner: Potential sponsors and partners are queuing up at Haas

Guenther Steiner: Potential sponsors and partners are queuing up at Haas 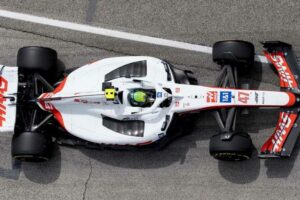 Guenther Steiner, has witnessed a rise in sponsorship interest in Haas due to F1’s increasing presence in the United States.

Haas are the only US-based team on the Formula 1 grid as it stands and, given their chequered past with the likes of Rich Energy and Uralkali as title sponsors, concerns about the team’s finances appear to be never too far away.

However, Haas are currently considering a number of new commercial options, according to Steiner, and that has been helped by Liberty’s continued push to break into and establish Formula 1 in the US market.

“Yes, I’ve seen the impact,” Steiner said when asked about the impact from a business perspective due to likes of Miami and Las Vegas joining the Formula 1 calendar.

“We’ve got a lot more interest for partnerships, for sponsorship and it has risen quite a lot.

“Now, we can take a little bit of time to go through and see how it develops but for sure, having the race in Miami and adding a race in Las Vegas next year, a third race in the States, will help all of this.

“We’re in no hurry but the sport is in a good place at the moment.”

Haas driver Mick Schumacher also welcomed Formula 1’s drive into the American market as he is a big fan of the all the razzmatazz that comes with the races in the US.

“I think it’s great that we’re becoming more and more American in some ways because I think the fans are great and I enjoy myself every time I go,” Schumacher said.

“I’m excited about racing there more and more in the future.

“I haven’t driven the [Miami] track so it’s difficult to say what the highlights are going to be and what it’s going to be like, but an American race is always fun.

“There’s always a lot of show, there are always celebrities that come who you wouldn’t get the opportunity to meet otherwise and it’s good to have the whole show broadcast.”

Haas head into the Miami Grand Prix with 15 points on the board having scored in three of the opening four rounds.

But Steiner does not see any particular strengths or weaknesses with the VF-22 and instead sees their challenger as a good all-rounder.

“I don’t think there any particular strengths or weaknesses, I think the car is pretty good all round,” Steiner assessed.

“Obviously, in the main race in Imola, we were not performing as we would’ve wished so we need to look into the data and see how maybe we can get the tires to work better and go again.

“I think the car in general is pretty good, we just have to keep on working hard and getting more points.”