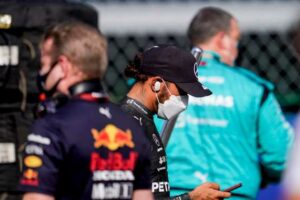 Lewis Hamilton has downplayed talk of Mercedes squandering a perfect opportunity to take big points off Max Verstappen at the Russian Grand Prix.

With Verstappen set to start the Sochi race from P20 on the grid, the Red Bull driver handed grid penalties for taking on a fourth hybrid system for the season, Hamilton had an open goal to grab pole position.

But a small mistake in qualifying, where he hit the wall, saw him line up P4 on the grid. It looked for a while as if Hamilton would have to settle for second place were it not for a late rain shower and the Brit’s early call to pit for intermediate tyres.

But with Mercedes unable to get Valtteri Bottas ahead of Verstappen, despite the Finn starting four places higher up the grid, the Red Bull driver managed to pull off an epic recovery drive as he raced his way to second.

The gap between the title protagonists is just two points in Hamilton’s favour.

It could have been a different story had Mercedes managed to grab the 1-2 in Sochi, but also at Monza, both tracks Mercedes were expected to have a huge advantage over Red Bull.

“Look, it’s not only the two races, there’s been plenty of races where we’ve not maximised, as a team, collectively, both drivers and everyone but we’re still in a fight and we can continue to improve,” he said.

“There are definitely things that we will try and do better moving forwards but we just won’t give up, we’ll just keep trying, keep pushing, remain hopeful and just do the work.”

Mercedes, though, aren’t the only ones who have lost opportunities this season, Verstappen retiring while leading in Abu Dhabi and then crashing out of the British, Hungarian and Italian races.

With more DNFs than Hamilton, but also more race wins, the momentum in this year’s title race has swung between the two protagonists.

Hamilton reckons it will continue to do so through to the final chequered flag of the championship.

“Well, undoubtedly it’s going to be tough,” he said.

“I think, for two thirds of the season so far they’ve had the edge. However, it’s obviously been difficult with all sorts of things, curve balls sent to both of us and our teams.

There’s still everything to play for in these next races. I think they’ve got a good set of circuits coming up and I anticipate or just continue to be really close between us. Just got to be hopeful of some good races.”