Home » Racing » 'Hamilton would like to keep compliant Bottas' 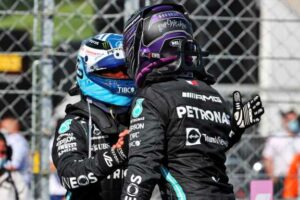 Although John Watson would love to see Mercedes sign George Russell, he feels the team will keep the peace with “compliant” Valtteri Bottas.

Mercedes have made it known that it is between Russell and Bottas for the second 2022 seat, and pundits are divided as to which way the team will go.

Bottas has been Hamilton’s team-mate since 2017, called up after Nico Rosberg’s shock retirement in the wake of a tension-fraught 2016 championship.

That was the last year that Mercedes had to deal with a true intra-team fight for the World title as Bottas has instead slotted into the “wingman” role quite comfortably.

And comfortable is not what the mood will be at Mercedes if “young lion” Russell joins says Watson.

“My thoughts are that Lewis would like to keep Bottas, because he is what I would call a compliant team-mate,” the former F1 driver told RacingNews365.com in an exclusive interview.

“What he doesn’t want is [to be paired with] someone like George, who did a stunning job last year in Bahrain.

“There is a very good reason behind why Lewis was prepared to have Bottas.

“If you bring in a young lion like George, who I think is outstanding… I’ve seen over the years where you bring in two drivers who then end up fighting each other in the championship, you open the door to another team.

“I think that, at the end of the day, Mercedes will keep Bottas, simply because it’s a known commodity.”

This season has been intense! 😅 Enjoy the break boys.

Let's bring it home in the second half of the season. 💪 pic.twitter.com/yuNIqwU1NN

Watson, though, is keen to see Russell step up into the Mercedes race seat.

Last year he had a one-off appearance with Mercedes, finishing ninth at the Sakhir Grand Prix on a Sunday where he and the team were left to rue what could have been as he was leading the race before a botched pit stop dropped him down the order.

The only problem with Russell joining Mercedes next season, says Watson, is he’ll have to play number two to seven-time World Champion Hamilton while they are team-mates.

“I’d love to see George in a Mercedes,” he added.

“But if that was going to be the case, George would have to accept that he will have to play second fiddle to Lewis, in any time they were together.”