Home » Racing » Helmut Marko asks: Ferrari have front row but what about tyres?

Helmut Marko asks: Ferrari have front row but what about tyres? 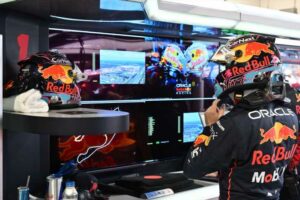 Ferrari may have locked out the front row of the Miami GP grid ahead of Red Bull but Helmut Marko says Sunday’s race will come down to “tyre wear”.

Although Ferrari had the better tyre management in the first three races of the season, Red Bull came back at Imola where they upgrades not only improved the car’s pace but also the tyre wear.

Max Verstappen romped to an easy win that Sunday, taking the chequered flag ahead of Sergio Perez to close the gap to Charles Leclerc to 27 points in the Drivers’ standings.

This weekend Formula 1 is again braced for a Ferrari versus Red Bull battle as Leclerc and Sainz have locked out the front row for the Miami Grand Prix ahead of Verstappen and Sergio Perez.

But while the Scuderia have the start position, Marko asks if they have the tyres.

“What matters is how the tyres wear out,” Motorsport.com quotes the Red Bull advisor as having told ServusTV, conceding that none of the teams know how the tyres will last in Sunday’s race given that it is a brand new track.

“[We have] a completely new surface and the long runs [from practices] are certainly not meaningful at four or five laps,” he added.

In fact all Marko does know is that the “hard tyre is very difficult to warm up.”

A costly error for the Dutchman in the final stages of qualifying 😩#MiamiGP #F1 pic.twitter.com/alE7EGLyKx

Tyres, though, won’t be the only factor.

With the new surface not holding firm in some of the corners, many of the drivers have pointed out that if they go off the racing line, it is game over.

“You cannot deviate from the ideal line, because then there will be no grip at all,” said the 78-year-old.

And given that the weekend has already seen a few crashes, Marko expects a Safety Car or two come Sunday’s 57-lap Miami Grand Prix.

“Well, I guess there will be some Safety Car phases,” he said,.

There is also a 20 percent chance of rain during the grand prix. “When it rains, it will be a real challenge, but exciting for the spectators,” he added.