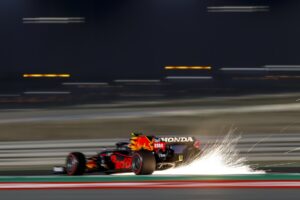 Red Bull’s Helmut Marko says due to the stability of the Honda engine, the team will finish this season with their current pool.

Two rounds remain of the 2021 campaign and although Red Bull find themselves trailing Mercedes by five points in the Constructors’ Championship, they are on top in the Drivers’ standings via Max Verstappen.

But in Brazil, Mercedes showed they have a mighty weapon in their arsenal, that being the new Internal Combustion Engine which powered Lewis Hamilton to a comfortable victory.

That ICE is set to reappear at the next round in Saudi Arabia, but Mercedes have been busy in the engine department with both Hamilton and Valtteri Bottas incurring multiple grid penalties for going beyond their permitted parts for the season.

It is likely Mercedes have now completed their engine pool for the remaining rounds but at Red Bull, that is a certainty.

The Mercedes engines are known to degrade in power output later into their lifespan but Marko, Red Bull’s driver programme boss, says that is not as much of an issue for the Honda engine.

And so there are no more new Honda engines coming.

Asked by Sky if another engine change would happen at Red Bull, Marko replied, quoted by Motorsport-Total.com: “No, we are not confronted with such fluctuations from Honda’s point of view. Our engines are stable.

“The fluctuation range is within half a per cent and not like Mercedes, where it accounts for almost two per cent.”

Mercedes’ “spicy equipment” in the words of Toto Wolff, that being the ICE from Brazil, has been saved for the Saudi Arabia and Abu Dhabi rounds as the team felt that is where the performance will be put to best use.

The newly-built Jeddah Street Circuit, which will host the inaugural Saudi Arabian Grand Prix, is being billed as Formula 1’s fastest street track, while the final round in Abu Dhabi will be held at a modified Yas Marina Circuit.

It is expected the new layout will produce lap times up to 10 seconds faster than before.