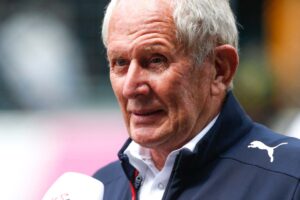 Helmut Marko has questioned why Sebastian Vettel’s punishment at the Hungarian GP was so severe compared to Lewis Hamilton’s time penalty at Silverstone.

Vettel’s car did not have enough fuel to offer a required sample at the end of the race in Hungary to ensure the legality of the Aston Martin, which led to his disqualification from the race – although the team’s appeal into that decision will be held on Monday afternoon.

The Red Bull motorsport boss continues to be vocal in his outrage surrounding Hamilton and Max Verstappen’s high-speed collision at Silverstone, for which the seven-time World Champion was given a 10-second time penalty, before coming back through the field to win the race.

Marko feels there needs to be a discussion about how the penalties should be calculated, while criticising Hamilton for his radio messages in combat with Fernando Alonso in Hungary.

“Vettel was disqualified because there was not enough fuel left in the tank. So we have to talk about the relation of the penalties,” Dr Marko told Speedweek.

“It is clear why Vettel almost ran out of petrol, because a normal race had been calculated and then he simply used more in the fight with Ocon – no driver saves petrol in this situation. Where is the relation there compared to Hamilton’s offence?

“Then there is Hamilton’s statement about Fernando Alonso’s dangerous driving. [Alonso] drove sensationally, defended optimally, and then this statement from someone who shoots out a competitor a race before.”

Looking at the season more widely, though, Marko believes the Red Bull team have performed better than he had anticipated – but said Verstappen and Perez’s recent crashes could cause engine penalties later in the season, as well as having to fork out for a hefty damage repair bill.

“The first half went better than we expected,” he said. “We are on a par with Mercedes in terms of both chassis and engine. Max is on a driving high, in his best year so far.

“Then came the big disaster, through no fault of our own, with Hamilton’s crash into Max’s rear wheel, which resulted in a scary spin-off by Verstappen and deprived us not only of a sure win – because Hamilton knew if he didn’t get past on the first lap he wouldn’t see us – but also over €1.5 million worth of damage.

“Now, as it turned out after qualifying at the Hungaroring, the engine is also still damaged. That means that at some point we will have to resort to a fourth drive unit, which means a penalty transfer.

“In the race, which started wet, we were still confident because Max is the rain king, until Bottas came and took out two of our cars, each with significant damage: Max’s right side could be patched up, but the balance was completely gone. In Sergio’s case, the second engine is gone, and we will need a fourth one as well, which means a penalty. These two incidents, caused by Mercedes drivers, have washed away our championship lead among drivers and constructors.”