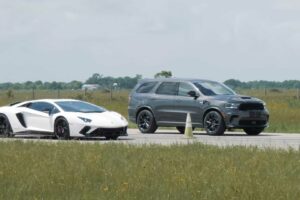 The Lambo should be launching harder than that.

Okay readers, you might need to suspend your disbelief just a little bit for this new drag racing clip from Hennessey Performance. The Texas tuner has its new HPE 1000 Dodge Durango SRT Hellcat dialed in, and as part of the validation testing before going to its new owner, of course they race it against a 730-horsepower (544-kilowatt) Lamborghini Aventador S. Gotta make sure the three-row SUV can beat the Italians, after all.

And yes, the supercharged Durango beats it. In fact, the beefy SUV absolutely humiliates the Lamborghini in not one, but two races. Considering the Aventador S is all-wheel-drive and capable of getting to 60 mph in less than 3 seconds, Hennessey must have some kind of space-warping technology to get its 5,700-pound SUV moving that fast. But here’s where things get sketchy, because we question whether the Aventador S in the video is actually living up to its potential. Considering this video is aimed at promoting Hennessey’s upgraded Durango, there are certainly grounds to question the objectivity here.

The first race is a typical showdown with both vehicles launching at the same time. The Durango leaps forward, and we’d expect the same from the Aventador thanks to its launch control system. But alas, it seems launch control wasn’t used. Instead of a shrieking V12 shoving the Aventador off the line, we see a rather mild rollout devoid of noise and wheelspin. As a result, the Durango jumps to lead of multiple car lengths in just a few seconds.

A second run sees the Durango driver give the hit to the Lambo. Once again, we see a modest rollout with no V12 scream, no tire spin, nothing. Perhaps the biggest facepalm moment is when the Lambo driver actually says the Aventador “is a dog off the line.” And you know what? It probably is a bit sluggish when you just roll onto the throttle without any revs in a high-revving engine. Fortunately, car enthusiasts are smart enough to know better but as a reminder, here’s what an Aventador S actually looks and sounds like during a properly aggressive launch.

Now that we’ve addressed these concerns (which are shared among numerous commenters on Hennessey’s YouTube video) perhaps there are some legitimate reasons behind this effort. The Lamborghini actually comes from a supercar rental service, and launch control can be quite stressful to a vehicle’s powertrain. Perhaps the driver wasn’t allowed to use launch control? Or, maybe the Durango’s launch control system can’t handle the 1,000-hp upgrade so to keep it fair, neither vehicle used launch control. We have our doubts on that, because the Durango sure looks and sounds like it’s blasting off with launch control enabled.

Or, perhaps Hennessey simply staged the race to make sure its Durango looks like an insane rocketship next to a properly fast hypercar. What’s your take on this showdown, Motor1.com readers?