Honda not banking on Hamilton taking a fourth PU 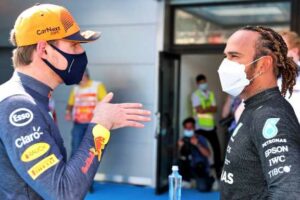 Valtteri Bottas may be onto his fifth engine but that doesn’t mean Lewis Hamilton has to take a fourth, says Honda’s Toyoharu Tanabe.

Bottas joined Max Verstappen at the back of the Sochi grid, both drivers taking new hybrid systems for the Russian Grand Prix.

It was Verstappen’s fourth Honda engine of the season, while for Bottas it meant a fifth Mercedes PU, the Finn revealing that his previous one, handed to him as recently as Monza, was “gone”.

But while Bottas is going through engines at a rapid rate of late, the same cannot be said of Verstappen’s title rival, Hamilton.

He is still using his third PU of the season, and hopes to be able to nurse it, and the other older one still in his pool, through to the season-ending Abu Dhabi GP.

Asked about the Mercedes engine situation, Honda’s Tanabe told Japanese website as-web.jb: “It’s unclear exactly what ‘engine is finished’ means, but if it means can’t be used anymore, the new addition will help the driver.

“As an engine manufacturer, I’m sorry to receive a penalty.

“I don’t know the reason for the replacement.”

But while Bottas has now taken a fifth engine, Hamilton continues to race his third of this season.

Christian Horner and Helmut Marko both believe, according to their information, that it is only a matter of time before the Brit is forced into taking a fourth hybrid system.

Tanabe isn’t so sure.

“I don’t know if Hamilton will replace it for the same reason,” he said, “so I can’t say anything.”

Even Toto Wolff doesn’t know where Mercedes stand when it comes to comes to Hamilton’s engine situation.

He just hopes that if the time does come, Hamilton can put in a recovery driver like Verstappen’s Sochi antics, racing from the back of the grid onto the podium.

He said: “We are looking from race to race. There’s a chance we will still change engines, so we’ll have a weekend like Red Bull Racing too.

“If that happens, it means that we have to score in this way too.”

As for Verstappen, he reckons he’s done taking new engines and the penalties that come with them.

“We’ll be fine with this engine to the end,” he said.