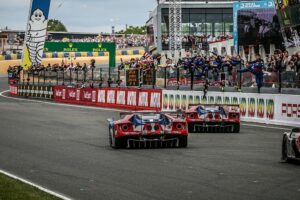 In January of 2020 at the IMSA WeatherTech SportsCar Championship Rolex 24 at Daytona, IMSA, the Automobile Club de l’Ouest (ACO), and the Fédération Internationale de l’Automobile (FIA) revealed a plan that would accomplish something that the industry, the racers and fans have been clamoring for lo these many years: A single Prototype design that could be raced both in the IMSA series, and the FIA World Endurance Championship and its most important race, the 24 Hours of Le Mans.

To no one’s surprise, that plan took a major step closer to fruition Friday when the three sanctioning bodies have come to an agreement on the technical specifications for the new category. This agreement means top-caliber LMH prototypes will be able to compete in the IMSA WeatherTech SportsCar Championship from 2023, when the convergence goes into effect at the Rolex 24.

This latest announcement means the LMH, or Le Mans Hypercar, introduced this year, will be able—through the liberal use of the Balance of Performance field-leveling computations—compete in the IMSA WeatherTech series with the Le Mans Daytona hybrid, or LMDh, cars.

The new regulations also will allow for performance-balancing rear- and all-wheel-drive cars.

The specifics for four key technical elements—tire fitment, acceleration profile, braking capability and aerodynamics—were “converged” and agreed upon by ACO, FIA, and IMSA prior to being approved by the WMSC on Thursday.

LMH eligibility will also require an individual business agreement between each manufacturer and IMSA, with respect to its sporting regulations.

All of this means, in a nutshell, that the same cars will be able to compete in IMSA and the WEC, which includes among others, Le Mans, the Rolex 24, SuperSebring, Spa-Francorchamps, he Motul Petit Le Mans and Silverstone.

Said John Doonan, IMSA president: “What we achieved as a group a few weeks ago in Paris has the potential to revolutionize prototype sports car racing all over the world. The stage is set for a highly competitive top category that will include many of the world’s greatest automotive manufacturers, showcasing relevant technology in the world’s most prestigious endurance races.

“Collectively, we have an opportunity to engage with the next generation of endurance sports car racing fans and elevate our sport to the highest levels. I cannot be prouder of the spirit of collaboration between our IMSA team, our colleagues at the ACO and FIA, and all of our automotive partners.”

The LMDh is based on a new chassis common to both ACO and IMSA, using elements of the Le Mans Hypercar and LMP2 chassis, and built by the four current LMP2 manufacturers: Dallara, Ligier, Multimatic and Oreca. This chassis will also be used for the new generation LMP2. Its silhouette and design will be modifiable, developed according to the brand or style of the manufacturer which will provide the engine power for the car. The car will use a common hybrid KERS system, on the rear axle.

More technical details for the car will be revealed in March at SuperSebring, in a presentation from the ACO and IMSA Technical Departments.

IMSA chairman Jim France said, “When my father, Bill France Sr., brought the first Daytona Continental sports car race here to Daytona International Speedway back in 1962, he wanted to bring together sports car drivers, teams and manufacturers from around the world. With the ACO, IMSA and manufacturers aligned, today’s announcement proudly takes my father’s vision to the next level.”