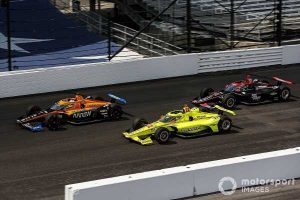 Chevrolet’s IndyCar program manager Rob Buckner says that retaliating after a Honda-dominated Indy 500 in 2020 has been Chevy’s focus in the offseason.

After winning with Team Penske-Chevrolet in both 2018 (Will Power) and 2019 (Simon Pagenaud), just one Chevy-engined car made it into the Top 12 in qualifying for last August’s delayed 104th running of the Indianapolis 500, and the best Bowtie performer on raceday, Penske’s Josef Newgarden, finished only fifth.

The Chevy drivers didn’t quite have the power of the Hondas at 1.5-bar turbo boost for qualifying – although Ed Carpenter Racing’s rookie Rinus VeeKay excelled himself with fourth – nor did they have the fuel mileage at 1.3-bar on race day. While the best Chevys could match the best Hondas for power at the reduced boost level, they had to lean out their fuel mixture sooner into a stint.

Asked if he felt Chevrolet and Ilmor Engineering had addressed their engines’ deficit to Honda Performance Development at Indianapolis Motor Speedway, Buckner told Motorsport.com: “It was definitely our top priority for 2021, addressing Indianapolis. We think we have a good plan – although we approach saying that with caution because Indy is its own undertaking for us and our rivals.

“I think 2021 will be interesting because I think there’s a bit less running. Less testing and practice means how you unload from your pre-event preparation is even more important.

“So we hope what we’ve done is enough, but you have to tackle Indianapolis in a very, very humble way because that track can always cause surprises.

“The 500 defines any IndyCar entrant’s season from a success standpoint, not just for drivers and teams and sponsors but for engine manufacturers too. It’s a three-hour event that overshadows everything else, so it’s definitely been a main focus for us.

“I’m looking forward to it because I think all of the technical group on the Chevrolet side of things has done a really good job of looking back at 2020 and finding out what we can learn from it in preparation for 2021.”

Although a late August date for the 2020 race means that Chevy will have had three months fewer in which to make its improvements for Memorial Day Weekend in May, Buckner regards that with equanimity.

“The Covid-19 implications on our series are the same for everyone,” he observed. “I try to not look at that as an excuse because last March or April, we were all just waiting and hoping to go anywhere to race.

“So 2020 wasn’t great for us as a brand, but looking at it from the point of view of any unbiased person within the paddock, and Chevrolet being part of the sport, to run the number of races we did (14) in the season, I regard it as a success, all things considered.”