Racing icon A.J. Foyt has been responding to fans’ questions on social media, and has declared that two-time Rodger Ward was his fiercest opponent on both dirt and pavement, and has expressed strong disinterest in simulator racing.

The 85-year-old will always be hailed as one of the most stunningly versatile racers of all time, for like Mario Andretti, Stirling Moss, Parnelli Jones, Jimmy Clark, Dan Gurney and John Surtees, he could expect to be fast in any given type of car.

Foyt devoted a large part of his career to Indy car racing, accumulating 67 wins (still the record), seven championships (again, a record), 53 pole positions (third all-time) and was the first of only three four-time Indy 500 winners. But Foyt exceled in several other categories. In sportscars, he conquered the 24 Hours of Le Mans, the Daytona 24 Hours (twice) and Sebring 12 Hours, in NASCAR he scored seven Cup wins including the Daytona 500 in 1972, in USAC Stock Cars he earned three titles, and he ended his career with 28 Sprint Car Feature wins and 20 Midget Feature wins.

But among the countless number of rivals he encountered in a racing career that spanned almost four decades, Foyt declares Rodger Ward – who won Indy in 1959 and ’62 and scored a total of 26 Indy car wins – as his strongest adversary.

“In Indy cars, as far as dirt, the toughest guy to beat was Rodger Ward with [team owner] A.J. Watson,” he responded to one fan, during a social media Q&A to kill time during the coronavirus-induced shutdown of U.S. motorsport. “He was tough. Parnelli Jones was tough and so was Jim Hurtubise, but Rodger Ward was the man to beat on dirt.

“On pavement… well actually he was [the best] on pavement too. Rodger Ward and A.J. Watson – that was a tough team to beat. They were older and ahead of us. To win races, you had to beat them.”

During the course of an appropriately diverse range of questions, Foyt explained that being spotted by Clint Brawner – the legendary self-taught chief mechanic who would eventually claim 58 wins at Indy/National Championship level – while winning the IMCA sprint car race at Salem, IN., was key to his breakthrough into the big time. On Brawner’s recommendation, team owner Al Dean gave Foyt his rookie test and he replaced outgoing superstar Jimmy Bryan within the Al Dean Racing team.

Asked which team owner had the greatest influence on him, however, Foyt responded: “I would have to say Bob Bowes of Bowes Seal Fast. They picked me up and I worked with [another legendary crew chief and mechanical genius] George Bignotti out of California…

“We got to winning races and won the championship in 1960, then came back and won Indy in 1961 [and a second title]. We stayed together and won a lot of races.

“I was qualified for Indy and I had my sprint car and two days before the [1961] 500, IRP [Indianapolis Raceway Park] was having a sprint car race and I said, ‘I’ve got to go run my sprint car and Bob Bowes said, if you get hurt, don’t call me because I’ll be drinking at the bar and you’re on your own. I said, ‘Well I’ve got to make some money.’ Lucky enough, I went out there and won the sprint race and came back and ran pretty good at Indy.”

Indeed he did, scoring the first of his four Indy wins after a classic duel with Eddie Sachs in the closing stages. His second win, three years later, would prove to be the last 500 win for a front-engined roadster, and one fan asked whether he preferred the front- or rear-engined Indy cars.

“I really enjoyed driving both of them,” said Foyt. “They were completely different kinds of cars to drive but lucky enough I adapted to both of them. When I had to adapt to the rear engine car, the back end would get out a lot quicker than you realized and any time the back end got out on a roadster, you normally spun out.

Foyt discussed some of his favorite race tracks, his favorite Indy 500 win and then blamed himself for missing victory in the infamous 1979 Daytona 500. But when questioned about simulators – had he ever tried one, and would he like to race Tony Stewart (for whom Foyt is an idol) in a simulator NASCAR race, Foyt was dismissive.

“No, that’s not racing. I never wanted to, even though people have wanted me to try it. For me it would just be a waste of time. I have too many other things I want to do…

“I never cared about simulator stuff. If I were to do anything, I’d want to race [Stewart] in a car.”

To read all of A.J.’s answers in full, click here 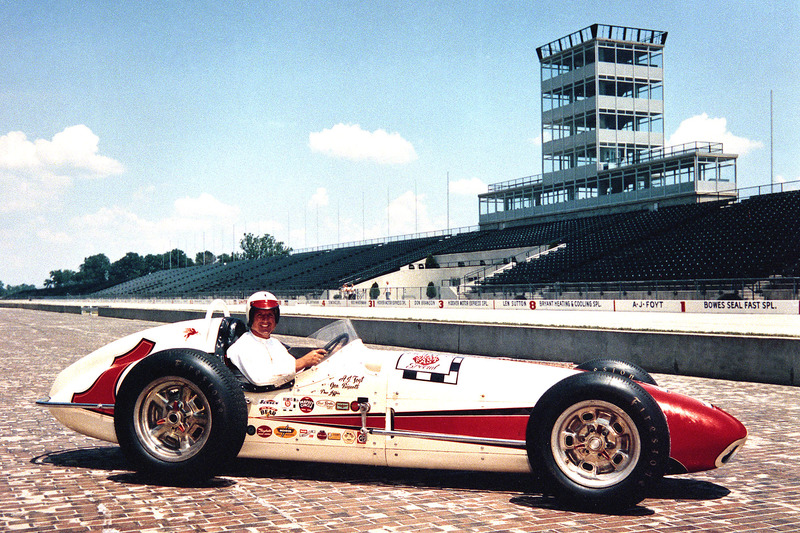 Foyt the morning after winning the 1961 Indianapolis 500 aboard his Bowes Seal Fast Trevis-Offy.