Home » Racing » Indi » How Josef Newgarden, Team Penske Got Back in IndyCar Title Picture at Mid-Ohio

How Josef Newgarden, Team Penske Got Back in IndyCar Title Picture at Mid-Ohio 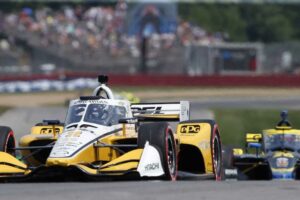 After leading most of the previous two races, only to suffer late-race misfortune in the final three laps that cost him a chance at the checkered flag both times, Newgarden once again led the most laps Sunday (73 of 80).

But this time, the third time proved to be the charm for him, as Newgarden earned both his and Team Penske’s first win of the 2021 season.

It wasn’t easy, as once again, Newgarden started to have late-race troubles as Chip Ganassi Racing’s Marcus Ericsson made up nearly three seconds in the closing laps Sunday and almost made it three-in-a-row of falling short for Newgarden. 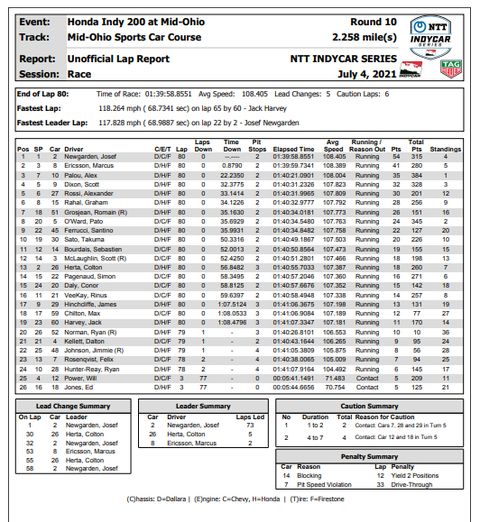 But Newgarden held on—and that’s all that counts for a team that has surprised this season not for its success, but it’s lack thereof.

Even Newgarden wondered if Sunday was going to be yet another “here we go again” bout with misfortune.

‘I’d start each stint and feel like I had everything under control (but) you get to the back end of it and I thought I was starting to fall apart,” Newgarden said. “It was really hard to hang on. But I had my wingman Tim (Team Penske president and Newgarden’s chief strategist, Cindric) coaching me all the way just making sure I knew what was up to date.

“I don’t know what to say other than this team has been doing the job. Everyone has been giving me a hard time asking what’s up with us not winning a race.

“But I don’t think these people at Team Penske could have done anything different. We’ve been in the game almost every race and had great performance and obviously, great support from our partner in Team Chevy. So, it’s great to seal a win here finally on the year.

“We’re going to need, probably, three or four more of these if we’re going to win this championship. But this team is capable of it. I’m just excited to be back. To come back and finally get a win, I’m happy for our whole group.”

Newgarden’s win at Mid-Ohio couldn’t have come at a better time, as the NTT IndyCar Series next races for the first time ever in a street course event in downtown Nashville on August 8, as the series takes a four-week break before resuming action for its final six races of the season. Music City is less than 20 miles away from where Newgarden grew up in suburban Hendersonville, Tenn.

“We’ve got some confidence with this win so I feel like we can make it all happen,” Newgarden said. “I always believe, I’ve told these guys, I believe we can win any race we go into. Nashville would be a dream to have a great result. I’m so proud.”

Newgarden’s 19th career IndyCar win was more than just a win. It was also a symbol of sorts, coming exactly 50 years and one day after Team Penske’s first IndyCar win in 1971 when Mark Donohue captured the 1971 Schaefer 500 at Pocono Raceway. That triumph began a five-decade legacy that has seen Team Penske earn over 500 victories (including 18 Indianapolis 500s) in 14 different varieties of motorsports, including CART, USAC, IRL, IndyCar, IMSA and NASCAR.

But Newgarden’s win Sunday, while exciting, remains just a small step forward if he and Team Penske hope to return to championship form this season. Even though Cindric said Saturday that “we’re not panicked by any means,” time is starting to run out, with 10 races already in the record book and only six more races to go.

Newgarden jumped up in the IndyCar point standings with the win, but remains a distant 69 points behind points leader Alex Palou (whose third-place finish at Mid-Ohio continues his torrid success streak).

It only gets worse from there for Team Penske: Simon Pagenaud is sixth, 114 points behind Palou; Will Power, who was knocked out of Sunday’s race early after contact with Scott Dixon and then Ed Jones on Lap 4, is ranked 11th, 176 points behind Palou; and newcomer Scott McLaughlin is 13th, 187 points in arrears to Palou.

To say Team Penske has a big hole to dig itself out of in the last six races is an understatement. But this is also the type of situation that the organization thrives on: the unexpected position of being underdogs, something that is definitely un-Penske-like.

Newgarden has history on his side in a way. His first IndyCar championship came in 2017. Scott Dixon won his fifth title in 2018. Newgarden bounced back for his second title in 2019, and Dixon roared back with his sixth championship in 2020.

While that kind of track record doesn’t guarantee Newgarden a third championship in yet another odd-numbered year, it does make one wonder. Plus, can Palou keep up his outstanding run in his sophomore IndyCar season? It’s almost inevitable that he’s due for a run of bad luck. Ditto for second-ranked Pato O’Ward.

If one starts handicapping the final six races, it would seem Newgarden and Dixon are arguably in the best position of all. They both have been in numerous championship battles and this is a situation where experience certainly is in their favor. And don’t count out fifth-ranked and first-year IndyCar driver Ericsson (115 points behind Palou) and Pagenaud.

Frankly, Power and McLaughlin are all but out of the running for the title … unless Power goes on a tear and wins at least four or even five of the remaining six races. And that still may not be enough for him to win his second IndyCar championship.

Winning the majority of the six remaining races seems very unlikely, given how Power has struggled this season, with just two podium finishes—a second at Birmingham and third at Road America. He’s also had three races that have really devastated his title hopes: 30th in the Indy 500, 20th in the first of two races at Belle Isle and Sunday’s 25th-place showing at Mid-Ohio.

Sunday’s win snapped a 12-race winless streak for both Newgarden and Team Penske, dating back to Newgarden’s win to wrap up the 2020 season at St. Petersburg, Florida. That’s just something you don’t expect to see from the winningest team in IndyCar history.

Yet, Newgarden is convinced things can turn around dramatically for both himself and his organization:

“Let’s keep it up,” Newgarden said. “We’ve got what, six races to go? We can make it happen, believe me.”