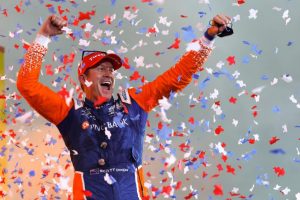 Scott Dixon moved to within one win of second place on the all-time IndyCar wins list with his win in the Genesys 300 at Texas Motor Speedway on May 1.

The win was Dixon’s 51st in IndyCar. Mario Andretti is next on the list with 52, and A.J. Foyt holds the all-time lead with 67 victories.

Fellow Kiwi Scott McLaughlin finished second, 0.2646 second back, and Pato O’Ward completed the podium. Alex Palou, who won the last time out at St. Petersburg, Florida, was fourth, and Graham Rahal rounded out the top 5.

CLICK HERE FOR A PRINTABLE PDF OF THE OFFICIAL RACE RESULTS

Scott Dixon showed the way at Texas Motor Speedway on his way to his 51st career IndyCar victory.

Pato O’Ward completed the podium at Texas on Saturday night in the first race of the weekend doubleheader at Texas Motor Speedway.

Alex Palou, left, gave Scott Dixon a challenge early, but Dixon went on to lead 206 of the 212 laps.

Alex Palou, who already has one win this season, won the pole for the Genesys before finishing fourth in the race.

James Hinchcliffe was one of just three cars not running at the end of the race. He went out after contact on Lap 159 of the 212-lap race to finish the 24-car race in 23rd position. Sebastian Bourdais (contact), Colton Herta (mechanical) were the only other drivers out early.