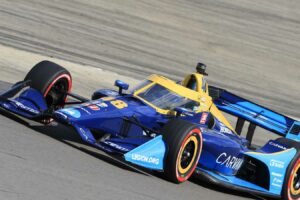 There is an increasingly likely scenario that could see Jimmie Johnson in an arm-wrestling contest with Tony Kanaan to determine who gets the Chip Ganassi Racing No. 48 in the 106th Indianapolis 500 next May.

“Maybe I could use two arms to try to beat him,” Johnson conceded.

This is only a looming problem because the seven-time NASCAR Cup Series champion is starting to explore the possibility of making a run at the Greatest Spectacle in Racing. Johnson is currently splitting the No. 48 with the 2004 Indy Racing League champion and 2013 Indianapolis 500 winner.

Johnson gets the road and street courses while Kanaan races the ovals through next season.

Johnson intends to make his first oval test in an Indy car in August at Homestead Miami Speedway. He and Grosjean were both initially hesitant to race on high speed ovals in IndyCar but recent safety advancements have piqued their interest.

“We’ve both been chatting over the course of the year about ovals and really about the experience altogether,” Johnson said. “As I get more and more comfortable with ovals, hopefully the test when it happens late August will go well, and I’ll continue to work closer to the Indianapolis 500 or more ovals in general.”

And no, Johnson isn’t actually going to fight Kanaan for the No. 48, as Ganassi could theoretically field a one-off to accommodate both drivers and their sponsors.

“Yeah, TK is safe,” Johnson said. “TK will have a car to drive on the ovals next year. The agreement is for two years. If I was to put together the Indy 500 or some other ovals, we would have to get another car number and get another car out, and then we’d have to decide who runs the 48 … Either way, there’s nothing for his fans to fear. He’s racing the ovals next season.”

After two decades spent on the top stock car schedule, Johnson entered IndyCar and IMSA to feed his competitive whims, albeit with a reduced schedule from 38 weekends a year to less than 20. The IndyCar Series has challenged him more than he expected.

“I think I’ve had to recalibrate my expectations,” Johnson said. “I felt like I would be much closer than where I have been. That part I realized early on after St. Pete that this mountain was a little taller than I first anticipated.

“Since I’ve come to grips with that, I’ve really enjoyed it, and just looking forward to getting in the car more and more. Every time I get in the car I feel more at home and more comfortable, and then trying to learn these new tracks, as challenging as that has been, it’s been a lot of fun.

“The circuits we run on are so interesting. Mid-Ohio, I didn’t know what to expect going into it and left there thinking, that’s probably the coolest lap that I’ve made in a race car so far in my career with just how fun the track is and how it flows.

“I knew it would be challenging, and I heard a lot of drivers talking about the challenge of it, but from an experience of driving, what a cool place.”

From that standpoint, Johnson wonders if an oval in an Indy car would feel more familiar after a career spent driving them on ovals. At the same time, he was a more than competent road racer in NASCAR and he says none of that crossed over to his current occupation.

“So that was interesting to me,” Johnson said. “I spent some time talking with Juan Pablo (Montoya) and he felt like when he was able to return to IndyCar after his NASCAR experience that there was a lot of knowledge that he could bring over and driving technique, and he felt like he had a leg up on the traditional IndyCar drivers at that point.”

On ovals, that is.

“That’s the carrot that’s hanging out in front of me,” Johnson said. “I’m running around the back of the pack now on street and road courses, and thinking, ‘man, if I was on an oval, where would I be?’ That’s the balance I’m fighting with right now, the risk versus reward during an oval race.”

The risk, of course, being safety.

There was a time where Johnson never would have entertained racing in IndyCar, much less on an IndyCar oval, but the aeroscreen and SAFER Barrier has changed everything.

In fact, Johnson says he kind of wants to crash a car just so he knows.

“I’m at a point now where in a funny way I’m willing to go hit a wall,” Johnson said. “In some ways it’s like, I’m not going to know unless I really hammer a wall how much it hurts, the difference between a Cup car and an Indy car.

“The folks at Ganassi are going to hate to read this wherever it comes out, but yes, I need to go make laps and I need to understand what that experience is like, but ultimately I’m just trying to understand the safety level of the car, and as I get more comfortable with that, my participation on ovals will increase.”

And while it’s unlikely Johnson will ever run the full schedule, only because Ganassi would have to figure out how to make that work with Kanaan, the possibility is there. That’s a remarkable turn of events for a NASCAR star who had no interest in driving an IndyCar even 10 years ago.

This whole thing started with Johnson doing a car swap with Fernando Alonso in 2018.

“Right now, the focus is on getting ready for the 500,” Johnson said. “It would depend on how the test would go. Honestly to run a full schedule next year would really be complicated, so I don’t know how realistic that opportunity would be at the end of the day.

“We have a commitment with TK and the 48 car and all the sponsors that he was able to raise and bring on board to run those four races, so to run a one off at the 500 is a more realistic option than looking at the full schedule, but we’ll just have to see how things unfold.”