Newgarden impressed by McLaughlin – and wants to try Supercars Two-time and reigning NTT IndyCar Series champion Josef Newgarden says he’s been impressed by Supercars champ Scott McLaughlin’s speed in an open-wheel car and wants to try his hand at tin-tops Down Under.

McLaughlin, who last year earned his second consecutive Supercars title with DJR Team Penske and won the Bathurst 1000, tested a Team Penske-Chevrolet IndyCar at Sebring short course last month, winding up just one second off fastest time of the day.

The 26-year-old New Zealander will test again at Circuit of The Americas during IndyCar Spring Training next week, and has been confirmed to make his series race debut in the GMR Grand Prix of Indianapolis in May.

Newgarden, who along with teammates Will Power and Simon Pagenaud attended McLaughlin’s IndyCar debut at Sebring, was impressed with the newcomer’s pace, but warned there is still much for him to learn in terms of actually racing open-wheel cars.

He told Motorsport.com: “I thought Scott took to it extremely well at Sebring, considering he’s never driven a high-performance open-wheel car or any open-wheel car for much of his career for that matter.

“But it’s still hard to put an assessment on what would be a successful first outing. I don’t know you can expect a heck of a lot considering his lack of experience of these types of cars and this type of racing. He’ll get some good testing [two days at Spring Training next week plus one other day, after the St. Petersburg season opener] and then he’s into his first race weekend. It’s very difficult for even a talented driver like him to come into a completely foreign category, to not only run it fast but then race it well, too.

“So I don’t think the expectations should be too high for Scott. If he can finish in the top 10 in the race, then I think that should be regarded as extremely successful for a one-race outing.

“There’s things for him to get used to like the extra grip from the Firestone reds [softer-compound tires] that even rookies from other open-wheel categories can struggle with at first. But I’m thinking primarily about the racing aspect of it. He’s a great racer with a ton of racing experience but racing a Supercar compared with racing an IndyCar are very, very different things.

“So to expect him to light the world on fire in only one race is pretty tough, which is why I’d say a top 10 would be a huge achievement.”

Shell sponsorship has helped facilitate the McLaughlin deal, and as Shell’s primary representative in Penske’s IndyCar team, Newgarden says he hopes the deal can work the other way too, enabling him to take part in a Supercars race.

“That would be amazing and I’ve certainly been asking!” said Newgarden, who went on to explain that the struggles encountered by primary 2019 title rival Alexander Rossi and James Hinchcliffe in last year’s Bathurst 1000 had not put him off.

“I’d be lying if I said that I wasn’t disappointed that we didn’t see a little more from those guys,” he said, “but it doesn’t make me think less of them and it also doesn’t dissuade me from wanting to go race one of those cars. I’m sure it would be amazing.

Asked if he would be interested in racing the 24 Hours of Le Mans, should the ACO/WEC/IMSA rules convergence persuade team owner Roger Penske to participate, Newgarden again sounded enthusiastic about the idea of sharing a Prototype with Power and Pagenaud.

“Oh, that would be fantastic, I hope Roger would take us!” he exclaimed. “I think we’d all want to go. I want to go for sure.

“I’ve been working my butt off to drive other cars. It’s hard to make it happen, but it’s not from a lack of trying.” 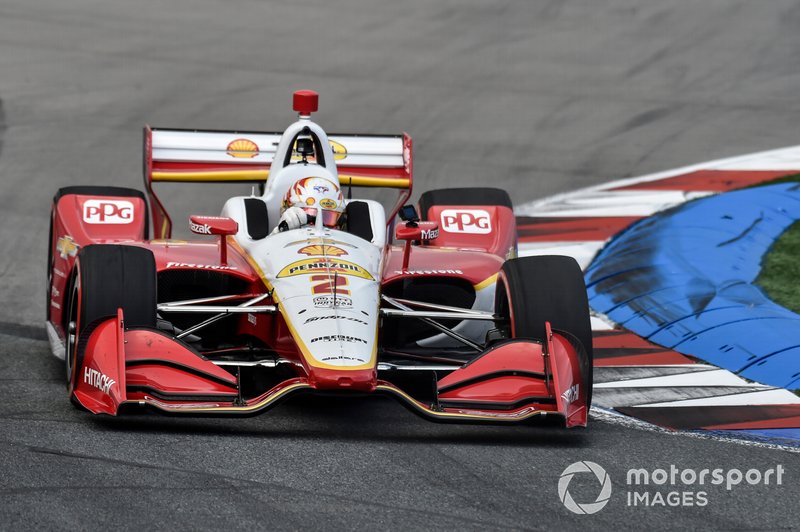 Josef Newgarden demonstrates the Shell-sponsored #2 Penske-Chevrolet on the Charlotte ‘Roval’.