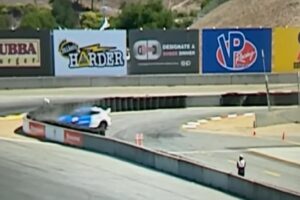 Former F1 driver turned IndyCar rookie Romain Grosjean had a bit of an off Saturday at Laguna Seca site of this weekend’s IndyCar Series penultimate race of 2021.

Grosjean video himself getting into the Honda Civic Type-R along with a passenger.

“Today, we’re going to do a bit of a lap with the pace car. Look who’s my passenger, Ed Jones,” he said.

“Do you even know how to drive a manual?” Jones answered

“I’m European, yes I do. Good Honda car, let’s see what we can do.” Grosjean replied.

The issue wasn’t with the lap itself, that went just fine. It was getting into the pits that turned out to be the issue. On entry to the pits Grosjean appeared to hit a curb slid the car into the wall. In true video game form, Grosjean and Jones exited the vehicle and ran away.

No word on if the pace car will be used for Sunday’s race.

This isn’t the first time an IndyCar pace car has been wrecked. In 2018 during the pace laps before the Chevrolet Detroit Grand Prix in Detroit a 2019 Corvette ZR1 pace car driven by Mark Reuss, executive vice president of global product development, purchasing and supply chain at General Motors Company spun headlong into the wall.

NBC was filming with the pace cars at Laguna Seca and Grosjean hit the tire wall on pit in, below is what it looks like 👇🏻 pic.twitter.com/cli4xaRKJf