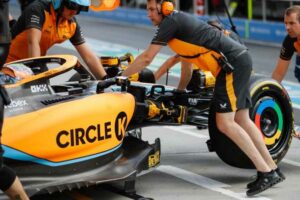 Colton Herta is taking part in his first Formula 1 test behind the wheel of the McLaren MCL35M in Portugal.

Herta, a seven-time winner in IndyCar, signed with McLaren in March to become a development driver for the team, with an opportunity to test their 2021 challenger, the MCL35M, included as part of the deal.

That chance has now arrived for Herta, who is with the McLaren team at the Autódromo Internacional do Algarve in Portugal, just outside the city of Portimão.

Now the MCL35M has returned to that track, this time with Herta behind the wheel for a three-day test running from July 11-13 (Monday to Wednesday) with McLaren test and development driver Will Stevens sharing duties with Herta.

Here’s Colton Herta in the 2021 McLaren at Portimao today 👀 🧡

“Colton is a proven talent in IndyCar and we will be interested to see how he adapts to a Formula 1 car,” said McLaren team principal Andreas Seidl in a statement on the team’s website.

“We believe this testing programme will provide him with valuable experience while demonstrating the benefit of expanding previous car testing to showcase promising drivers for the future.”

Both drivers potentially pose a threat to one half of McLaren’s current F1 line-up, Daniel Ricciardo, who since debuting for the team in 2021 has regularly struggled to match the performance level of his team-mate Lando Norris.

McLaren Racing CEO Zak Brown recently though confirmed Ricciardo’s seat is safe for the 2023 season, that coming after making the admission that Ricciardo was not living up to expectations.

Asked by Fox Sports Australia whether Ricciardo would see out his McLaren contract, which runs until the end of 2023, Brown replied: “Oh yeah, he’s a fighter, and his results since we’ve said that — that’s not how they were intended — have been much closer to Lando, and he beat Lando [in Baku and Canada], so maybe there was something…firing him up.

“We love working with him. He loves the team. We’ve seen when we give him a car that’s capable of winning, he can win in it.

“As he said last year, he didn’t feel he had a good season last year and he still won. So it’s in there. We just have to figure out how to unlock it, give him a car he’s more comfortable with.”

Herta had been in the running to join Alfa Romeo when Michael Andretti launched a takeover attempt in 2021, while since the collapse of that he has been linked to a drive should the Andretti Global project be accepted into Formula 1.