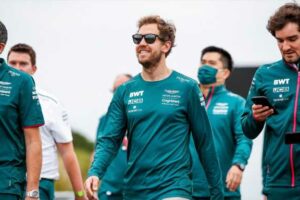 Sebastian Vettel joked about touching the wings of Lewis Hamilton’s Mercedes after sprint qualifying in Brazil.

Even before the sprint at Interlagos, it had been quite the weekend, with off-track matters taking the spotlight.

After cruising to P1 in traditional qualifying on Friday, Hamilton was placed under investigation for a potential technical infringement regarding his DRS and was ultimately disqualified, causing him to start sprint qualifying from the back rather than the front.

If that wasn’t enough drama, Max Verstappen was also investigated for touching the rear wing of the seven-time World Champions car in parc ferme after qualifying.

Doing so is illegal, and while the Dutchman escaped without a racing penalty as he wasn’t deemed to have caused any damage, he was fined €50k and warned that doing the same thing again could well result in a more severe punishment.

There are few drivers on the grid who love a good joke more than Vettel, and that was very much evident at the end of all the chaos, with the German having a bit of fun on the team radio at the end of the sprint.

the rear wing joke and the whole team laughing in the background, comedian 😂 pic.twitter.com/OIgWYOPzyL

“Thank you, I’m going to touch Hamilton’s rear-wing,” he told his team while pulling in to parc ferme after being congratulated on his performance.

“I’m joking! I’ll try the front-wing, maybe it’s €25k,” he added after being told it would be “very expensive.”

It was a largely successful Saturday for Vettel with the Aston Martin crossing the line in P10 just ahead of former team-mate Daniel Ricciardo. As Hamilton has a five-place grid penalty for an ICE change, he’ll start the main race in P9,

Despite that though, he wasn’t feeling particularly positive looking ahead to Sunday as, in Ricciardo and Hamilton, he has two faster cars lining up just behind him.

In fact, he doubts he’ll be able to hold on and score any points at all.

“I think tomorrow will be difficult,” Vettel told reporters in the Sao Paulo paddock.

“The cars behind us are faster. McLaren is behind, we will have Lewis behind again, so it’s going be difficult to hang on. We will see what happens tomorrow. We had a good start, so I am ready for everything.”