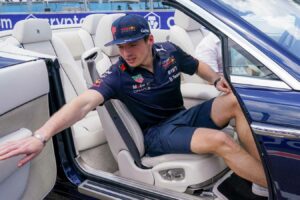 Jean-Eric Vergne feels Max Verstappen might be out of reach in a Formula 1 car, but it would probably be a different story in Formula E.

Former Toro Rosso driver Vergne says Formula E is a bit more random at times than Formula 1, admitting it is sometimes difficult to understand what goes well and what does not go as planned – despite adding he puts in “more work” now than he did in F1, given the amount of simulator time required to get the most from their cars.

The Formula E field is stacked with ex-Formula 1 talent, with Vergne being the series’ only two-time champion to date – so he knows better than anyone what it takes to succeed in the all-electric series.

“Sometimes you win, but you don’t actually know exactly what goes right,” he told reporters at the Berlin ePrix, quoted by the Dutch edition of RacingNews365.

Wheel-to-wheel racing is what it's all about!

“Also, sometimes you don’t win races and you don’t really know what went wrong. The secret is to focus on yourself and get the most out of the package.

“It’s very hard work. We spend a lot of time with the engineers in the factory and many, many days in the simulator.

“I work much more often than I did in Formula 1 and I know Formula E drivers spend much more time in the simulator than other racing classes.”

Vergne was able to say outright he probably would not be able to beat the reigning World Champion if they were in the same Red Bull team, but he feels he would have more of a chance against him in his current car.

“If I race against him in Formula 1, I have to be honest – I’m not going to beat him,” Vergne admitted. “He is clearly at the highest level in Formula 1. If he comes to Formula E, he is not unbeatable.”

Vergne was unequivocal in believing he could beat the Dutchman in electric machinery, too.  “You can bet on that. I think I’m the best!” he concluded.

The Frenchman took P2 in the first Berlin ePrix on Saturday and sits second in the current Drivers’ Championship behind former McLaren driver Stoffel Vandoorne.