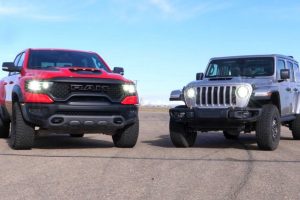 They both sound amazing.

High-powered off-roaders are big business these days, and Stellantis is especially keen on the segment with offerings like the Ram TRX and Jeep Wrangler 392. The Fast Lane Truck gets ahold of this pair, and the natural thing to do is to drag race them.

The hosts spend the first chunk of the video going back and forth about the vehicle’s attributes. Most notably, the Wrangler 392 has a power-opening roof. The TRX boasts an active suspension system and rides on 35-inch tires.

In the first race, the TRX seems to jump the start a bit early. It doesn’t matter, though, because the pickup is significantly quicker than the Jeep, and there’s nothing the Wrangler can do to keep up.

For the second run, the TRX driver waits for the Wrangler 392 launch before setting off. The result is a much closer race. The Ram still wins but only by a nose.

While it’s the loser in these races, the Wrangler 392 is still impressively quick. The Fast Lane Truck records at high altitude, and the naturally aspirated engine still pushes the SUV to 60 miles per hour (96 kilometers per hour) in 5.48 seconds. At sea level, it can hit 60 mph in 4.5 seconds and cover the quarter-mile in 13 seconds, according to the company.

The official specs indicate the TRX also gets to 60 mph in 4.5 seconds and covers the quarter-mile of 12.9 seconds. Although, it looks a lot quicker in this video. The high altitude might give the supercharged V8 an edge in these races.